NQA Certified UK Firm to ISO 14001:2015 Within Minutes of Its Publication 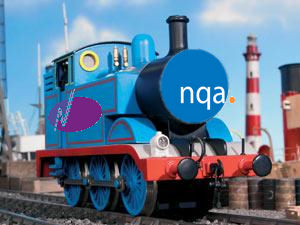 As if to prove that bullshit is not an environmental risk, the UK office of registrar NQA has certified Northern Rail to ISO 14001:2015 within minutes of the standard being published. Presumably, NQA is working on a way to sell certificates to companies before they actually comply to standards, or to standards that haven’t even been invented yet, perhaps by using a flying blue box.

The NQA press release tries to convince everyone that this wasn’t some kind of insane magic trick or a bit of paradox-inducing time travel, but really just the work of Northern Rail’s committed management. Per NQA’s Managing Director Matt Gantley:

Northern Rail is the first in the world to achieve certification with NQA to the new ISO 14001:2015 standard. This achievement demonstrates exceptional corporate leadership.  Northern’s customers can be more confident of choosing a service provider that protects and improves our environment.

Apparently “exceptional corporate leadership” means having the cash to pay NQA to audit you to a draft standard ahead of time, and then wait to get your certificate at 12:01 AM on the day the standard is officially released, making your magical overnight NQA cert appear somehow valid.

And that stupid, insulting idea probably made perfect sense to both the idiots at NQA and Northern Rail. They apparently think that the world will be impressed with their ability to vomit a certificate only minutes after the corresponding standard was released. If I was management at Northern Rail, I would fire NQA for running this craven press release, since it will only bring shame, humiliation and indignation on Northern Rail. I mean, you would think a train company would know something about timing, for God’s sake.

Meanwhile, in the real world where people are not morons, everyone sighed in frustration at the growing deception and ever-more disgusting practices used by ISO registrars, all done under the banner of their various accreditation bodies.