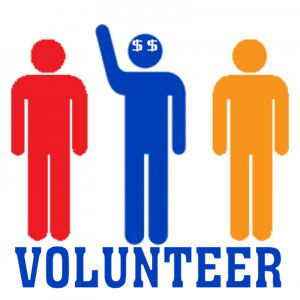 So, a common refrain from TC 176 representatives is that they are “volunteers,” and thus deserve nothing but our respect and admiration. If they create a standard that invents crazy-ass nonsense from out of thin air (“risk-based thinking!”) or help enable a corrupt certification scheme that allows heroin dealers and explosive airbag manufacturers to bear ISO 9001 certification, well, they still don’t deserve any oversight or blame, because they’re volunteers!

Take former TAG 176 Chair Paul Palmes, who constantly beats the drum that he and his TAG cronies are nothing more than “volunteers” trying to aid society with their good works.  Or TAG 176’s Denise Robitaille, who used the claim that her pals are “volunteers” to launch a wildly dubious fundraising campaign, trying to nab $50,000 a pop out of wide-eyed dupes, all with the overt help of ASQ. Or Russell Westcott, who made similar claims in his book on ISO 9001. Ditto for TC 176’ers John Walz, Scott Duncan, Mark Braham, Baskar Kotte, Jack West, Lorri Hunt, Alka Jarvis, Nigel Croft, and at least a dozen others.

Keep in mind, the accepted definition of the word “volunteer” requires that the person offering up their services or free time do so for purely altruistic reasons, to help others with no possible personal reward or benefit to themselves. Says the dictionary:

– a person who freely offers to take part in an enterprise or undertake a task.
– a person who works for an organization without being paid.

Volunteering is any activity in which time is given freely to benefit another person, group or cause. Volunteering is part of a cluster of helping behaviors, entailing more commitment than spontaneous assistance but narrower in scope than the care provided to family and friends.

This notion of doing good with no intent of personal reward is what differentiates a “volunteer” from either an “intern” or an “opportunist.” Since the list above doesn’t include any interns, you can guess what they are.

Seriously –  go back and look. Every single name I mentioned is a private consultant, who then uses their TC 176 credential to promote said private consultancy, as well as to sell books, seminars, webinars, speaking engagements and training sessions. There’s nothing at all altruistic about their motives since they invest money in attending meetings with the intent of turning a profit later when they sell their services.

If they were truly altruistic, they wouldn’t mention their work when selling their services, or they would conduct the work in anonymity, rather than bleating about their “sacrifice” any time Sermin Vanderbilt hands them a microphone.

Simply put, I’m guessing that not a single one of them could afford to “volunteer” their time and money flying around the world to go to meetings if they weren’t compensated. (Well, maybe Croft or West. Not the rest, who are all backbenchers.) But nevertheless, they find it absolutely necessary to mislead the public into believing they are altruists, getting nothing at all in return for their work, and “sacrificing” for the love of ISO standards and the greater good of humanity. They want you to think they’re running a fricking soup kitchen, feeding the homeless. They’re not. The very fact that they have to reach into misdirection reveals that they know they’re up to no good, and are clumsily trying to obscure it from you. It’s not very convincing.

Anyway, yesterday I gave a free copy of my book to a reviewer in the hopes they will promote it, but since I “sacrificed” my book, I do expect to replace Mother Theresa, and be canonized for my good works. Get working on that, Padre.