ISO Pushes Through with Annex SL Revision, As Rep Hortensius Says “Most Users Don’t Have a Clue”

ISO is pushing ahead with its revision to Annex SL, the mandatory requirements for all management system standards published by the company, even though only 13% of ISO member nations voted for it. The document will include “mandatory common text” to be inserted into the standards, despite the fact that this violates the WTO regulations on Technical Barriers to Trade, and ISO’s own standards development procedures.

Such rules say the content of standards is supposed to be drafted by subject matter experts within specific Technical Committees, one assigned for each standard. TC 176, for example, is tasked with drafting ISO 9001 and related quality management standards, and (allegedly) requires such standards to be written by experts in quality management. Currently, ISO publishes 48 different “Type A” MSS’s, which include management system requirements, and which will be impacted by Annex SL. These currently include the following subjects:

Rather than ensure Annex SL includes representatives from each subject, the Annex L text is instead drafted by a largely unknown group of individuals granted permission to do so by the ISO Headquarters, and headed up by Nigel Croft (UK/Brazil) and Dick Hortensius (Netherlands). These people are not elected, and yet are writing text that will impact on standards affecting everything every one of those subjects listed above, and more.

The Netherlands’ Hortensius is the de facto head of this effort, and the current draft of the new Annex SL (currently circulating under the draft name “ISO DGuide 83”) shows the only edits made were done so Hortensius himself, and not a single other person having any say. In short, Hortensius is drafting Annex SL on behalf of 48 separate trade sectors, and then allowing everyone else to vote on it. Hortensius probably thinks he’s an expert on all these subjects, but he’d be the only one who thinks so.

Here is a screenshot of the current Annex SL / DGuide 83 text. Each note is initialed “DH” and shows Hortensius single-handedly editing major definitions of universal terms like “objectives.” Under ISO rules, such changes should be drive by the applicable TC, but here Hortensius is doing it on behalf of an entire planet that didn’t elect him for such a role. In many cases, the definitions were already written by other committees, long before Hortensius was granted this God-like role. The original drafters of these definitions and requirements must be livid. 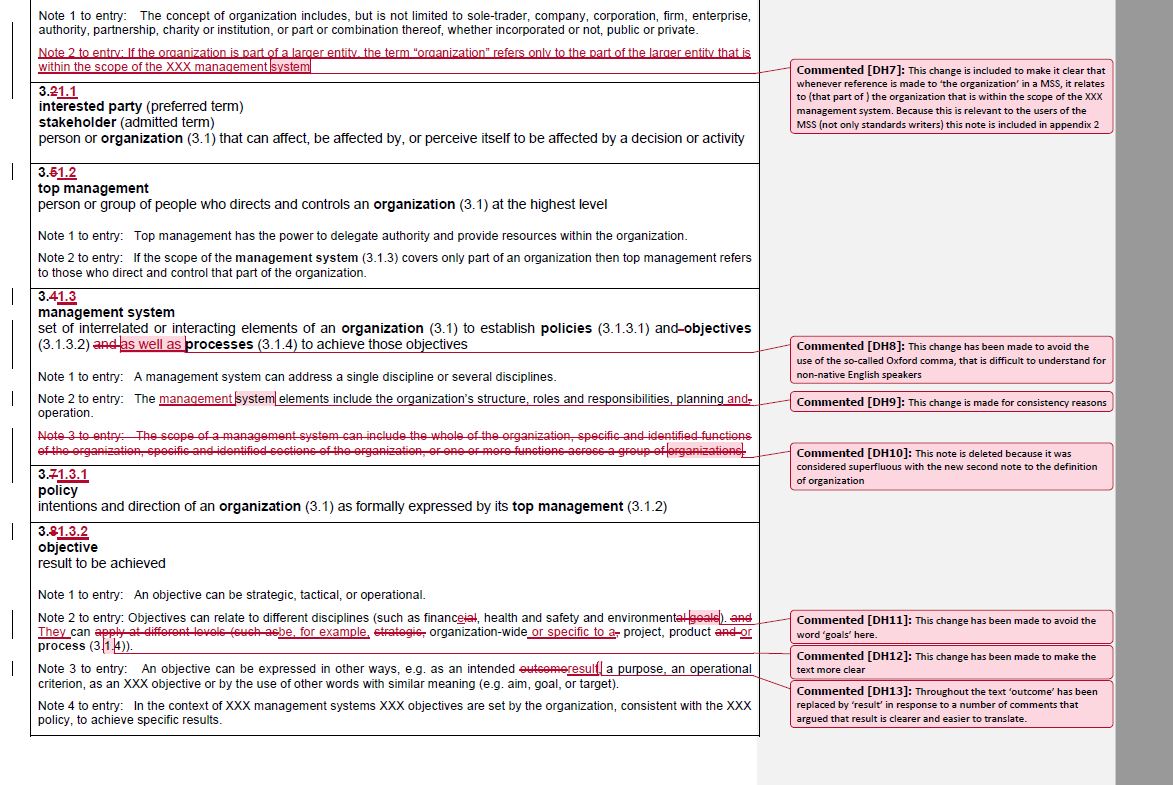 And let me pre-empt ISO’s expected falsehoods. They will claim that Hortensius’ edits are just him typing the feedback received by stakeholders and ISO members. That will be a lie. Hortensius is literally altering text on his own, and then everyone else is just voting on it.

Hortensius also shows nothing but disdain for the input of users who have voted with their wallets to date, and proved that the first attempt was not what they wanted. It was under that draft’s text that the confusing language regarding “context of the organization” and “documented information” was inserted, without the input of formal TC members. The introduction of the text in ISO 9001:2015 led to the biggest decline in certifications to that standard ever seen in the standard’s entire history, going back to 1987. ISO has routinely ignored the data.

When confronted back in September of 2019 with ISO Survey data, here is what he wrote to me (red highlighting added by me):

For a number of years I lost interest in the details of this survey because the way of data gathering is changing from time to time and now a new way of ‘counting certificates’ has initiated that makes it even more difficult to analyze trends. Apart from that the figures have been highly uncertain anyway for a long time.

For me (and NEN) management system standards are not primarily developed for certification purposes (NEN contrary to many other standards bodies does not provide any certification services) but as references for ‘good management practice’ that organizations can voluntarily apply to improve performance and stakeholder relationships.

I do not think that there is a clear relationship between market interest in the standards and the way these are developed. Most users that I encounter during training session, seminars etcetera do not have a clue how standards are developed and how they can be involved.

I can only say that since 2015 I have got a lot of positive feedback in the Netherlands on the new set-up of ISO standards (HLS, plug-in model) that meets organizational needs for standards that are easier to apply in an integrated way and better align with how organization need to respond to societal developments (context, risk & opportunities, leadership, etc)

In short, Hortensius dismisses both the data provided by ISO and the input of “users,” in stark contradiction to what ISO 9001 tells its users to do (“manage by data” and listen to the “voice of the customer.”) 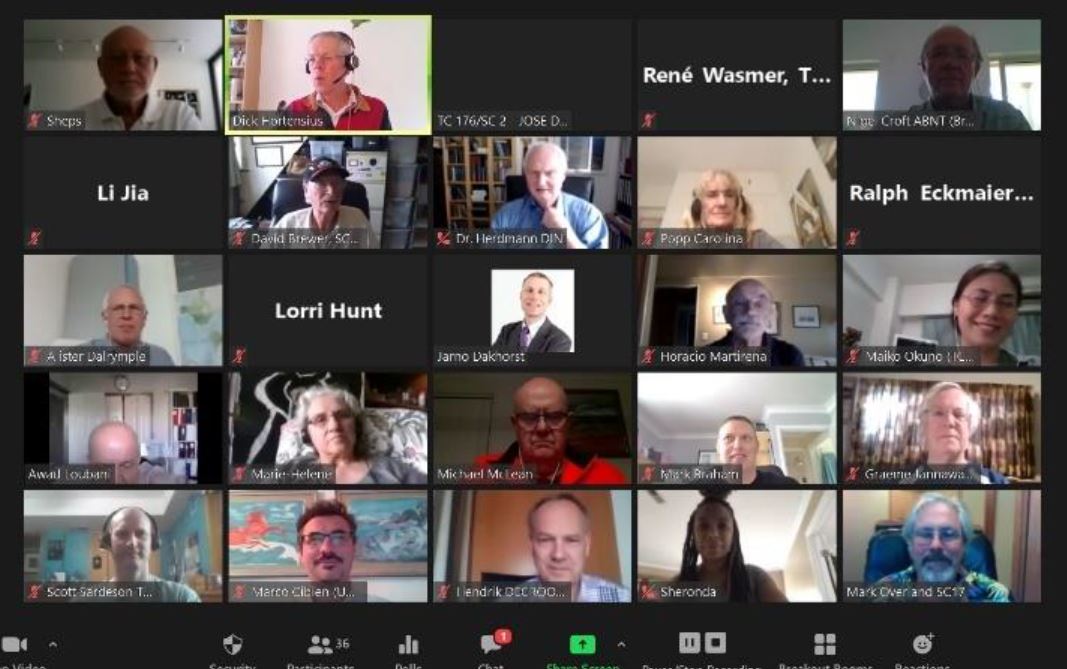 A handful of ISO TCs do send delegates to help Hortensius and Croft with their baby, but this participation is entirely voluntary. As a result, the majority of users come from a tiny percentage of the 48 possible MSS TCs, most of them from TC 176 representing quality management. As usual, it’s left to “whoever shows up,” which means the usual set of ISO toadies and self-promoting charlatans like Sheronda Jeffries, Mark Braham, Michael McLean, Lorri Hunt and Alistair Dalrymple.

The overwhelming number of TCs related to the 48 Type A MSS standards are not represented.  ISO essentially shrugs, blaming them for not participating.

the claim that TC’s or nations “vote” on the Annex SL text is a red herring. First, understand that national delegates are merely voting on text that Hortensius and his friends wrote, without actual subject matter expert input. Voting on text that someone else wrote is very different from writing it yourself, but ISO pretends this is not so.

Such voting is entirely symbolic, anyway, since Annex SL is embedded in a mandatory procedure (the “ISO Consolidated Supplement”) that is then flowed down to the TCs. They face a choice: implement the Annex SL text into your standard, or your TC will be disbanded. Because TCs are led by cowards, you know how this ends.

But let’s pretend the voting matters, and give ISO the benefit of the doubt. The voting results showed that only 22 nations approved the Annex SL text. Three nations voted against it: Canada, Germany and Italy. (Given that Italy is a major ISO 9001 user, you’d think they’d listen.) Iran and Spain abstained.

As of Sept. 2020, ISO is comprised of 165 countries with “Member” status, meaning that only 13% of ISO members will have voted to approve Annex SL. There is no way ISO can spin these numbers.

It’s not an accident that ISO doesn’t have quorum rules for such things. It wants to force Annex SL through in order to strip away the rights of national bodies and TCs to write standards, so that it can push standards to press faster. ISO makes no money when standards are stuck in committees, they only make it when they are offered for sale on the ISO website.

The revision to Annex SL will hasten the further demise of ISO standards, and thrust us back into a chaotic mix of customer mandated procedures and “industry-specific” standards, nearly all of which conflict with each other. But ISO is only interested in pushing paper and selling books, no matter the impact on world trade.

If you’re enraged by this mess, feel free to write Hortensius directly at dick.hortensius@nen.nl. Let him know you do have a clue.

UPDATE 29 September 2020: Sources within the HLS Taskforce 4 have confirmed that that name of the Annex will revert back to “Annex SL,” and not be changed to “Annex L,” after talks broke down between ISO and the IEC on making it apply to both organizations. The original version of this article referred to the HLS text as “Annex L” and has been updated.