BSI has closed a complaint filed against it after email evidence showed senior executives of its US branch imposing nonconformity quotas on auditors as a means of ensuring the company’s financial health. In an email addressed to Oxebridge, and without any indication of its author, the BSI response shuts down the complaint, denying the issue outright but without providing any explanation and without addressing the damning documentary evidence.

The email was sent by the generic “EMEA.Complaints@bsigroup.com” address, and included a one-page PDF response. That response was signed only as “Regulatory Systems Administration – Compliance and Risk” and did not include the name of the actual person writing it. The letter included an illegible initial.

The metadata of the PDF file indicates it was created on May 18th 2020 by Andrea Cardenas, BSI’s current EMEA Business Excellence Manager. The letter appears to have then been backdated to May 15th. 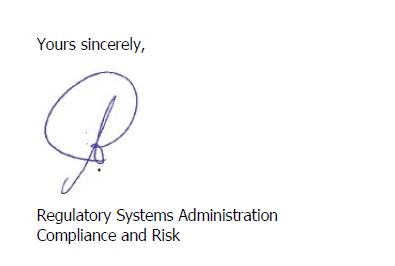 The response was already later than BSI’s complaints handling procedure requires, which demands the body acknowledge a complaint within two working days. That deadline was May 6th.

Oxebridge provided documented evidence that showed a senior BSI Americas Vice President and its head of aerospace imposing a “1 NCN per audit day” quota on its auditors, claiming the quota was “scientific” and intended to “improve our… financial performance.” Upon publishing the initial report, other current and past auditors from BSI confirmed the quota was a mandate, and that they were personally expected to deliver on it.

At no time did BSI dispute the authenticity of the emails.

BSI’s response appears to ignore these facts entirely, however, and instead simply shuts down the complaint without any details:

After completing the investigation, we confirm that BSI does not demand auditors to raise non conformances to improve our financial performance or in a way that creates risks to our impartiality.

At the same time, the response shows that BSI took no action, and presumably is allowing the “quota” directive to continue.

The unsigned nature of the response denies Oxebridge the ability to ensure that BSI did not violate ISO 17021 by allowing a conflicted person to participate in the complaint’s closure. Typically, anyone involved in the reported problem must recuse themselves from the complaint investigation, but by not signing the response, BSI masks those responsible for it.

The response is in keeping with prior BSI complaint responses. In a prior complaint which alleged BSI’s “Entropy” software allowed the registrar to sell consulting services for quality systems it later certified — a violation of ISO 17021 — BSI also responded without providing any explanation of a trove of evidence which was put to it. That decision was later upheld by BSI’s accreditation body, UKAS, who also ignored the evidence.

Andrea Cardenas is also listed as the “Entropy Project Leader” for BSI, which would suggest her role in the subject of the prior complaint should have ensured she recused herself from the latest complaint.

In another case, BSI was found submitting proposals which falsely implied that ISO 9001 “pre-assessment audits” were mandatory; in fact, these are optional services that most clients do not require. In that case, Oxebridge obtained evidence that showed the pre-assessment audits were not listed on the quote under “optional” services, but instead placed next to the mandatory audit activities. In that case, BSI never responded at all to the complaint submitted to it.

Oxebridge has rejected BSI’s response and demanded one that is provided under a proper signature, and which addresses the documented evidence. Failing that, Oxebridge will escalate the issue to BSI’s current accreditation body, ANAB.

Neither ANAB nor the IAF has commented on the BSI quota emails, nor appear to have taken any action.