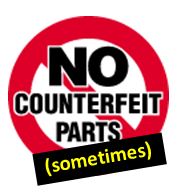 This started out as an innocent debate between me and another AS9100 professional. My colleague asserted that red dykem was sufficient to “permanently mark” scrap per AS9100 clause 8.3, but his registrar cited him with a nonconformity, claiming dykem is not permanent. I sided with the registrar, arguing that since dykem can be removed, it doesn’t meet the requirement to prevent the part from being leaked back into the supply chain. All the bad guys have to have is some isopropyl alcohol, and they can re-sell the part as new.

Because the Official IAQG interpretations document isn’t clear on this — it offers two simultaneous, and apparently contradictory, explanations for 8.3. On page 11, the document states:

“The intent of this requirement is to ensure no defective product re-enters the value stream which is the purpose of having the requirement to physically render nonconforming product unusable.”

On page 12, however, the document states,

“The intent of this requirement is to differentiate scrap parts from good parts to avoid parts being used unintentionally.”

So to get some clarity, I submitted a request through the IAQG portal for a clarification. One again, my failure to anticipate politics leads this down a needlessly winding path.

Rather than have my request formally put before an IAQG committee with consideration given to updating the Official IAQG Interpretations document, I instead received a personal reply from IAQG “Americas Lead” L. L. “Buddy” Cressionnie, of Lockheed Martin.

His first comment was just a restatement of the AS9100 standard, so had no value. I pressed for an answer to my question, to which he responded, incredibly:

Some would argue that no marking could be considered permanent and could be removed, like dykem or red paint.  The intent of the requirement is that the marking can not be easily rubbed off or washed off.

That means that Mr. Cressionnie just created a third “intent of the requirement”! And it was one based on a subjective concept: what constitutes “easy rubbing?” What if one guy has arms like Popeye and another like Don Knotts, are they both subject to the same definition, even if “easy” is different to each of them?

By the way…Many OEMs allow marking of scrap parts with red paint. Product dispositioned for scrap shall be conspicuously and permanently marked or positively controlled UNTIL physically rendered unusable.

I would add, “by the way, many OEMs” are also suffering from a very serious problem with counterfeit parts getting on their aircraft… including Mr. Cressionnie’s own Lockheed Martin.

He then goes on to quote the previous IAQG interpretation that “permanent marking” is only relative to “the product storage environment (e.g. parts stored outside, subject to rain and sunshine, should be marked with water resistant, non-fade markings) such that it will not be rubbed off inadvertently or become removed during handling.” That is a uniquely IAQG-developed position, and apparently one created personally by Mr. Cressionnie… and which utterly contradicts an entire industry. It’s staggering in not only its ignorance of the aerospace industry’s anti-counterfeiting efforts, but also in its wholesale redefinition of the term “permanent marking.”

Clearly I am not getting anywhere with Mr. Cressionnie. I’ve since asked that he consider having my question posed to the IAQG itself, so I can get more than his personal opinion. He has not addressed this request, and apparently has refused it. So the entire AS9100 scheme is stuck with his personal, and grossly irresponsible, opinion.

What’s so shocking about Mr. Cressionnie’s response — that AS9100 is just about making sure stuff doesn’t get rubbed off — is that it so glaringly contradicts other SAE AS standards, FAA rules, USAF and NASA guidelines, and even Lockheed Martin’s own supplier quality rules! How can Mr. Cressionnie not even know what his own company requires?

b. Effective mutilation may be accomplished by one or a combination of the following methods: grinding, burning, removal of a major integral feature, permanent distortion of products and articles, cutting a significant size hole with a cutting torch or saw, melting, sawing into many small pieces, and removing manufacturer identification, part, lot, batch, and serial number.

Then, Aerospace Industries Association (AIA) has declared that the FAA rule is best (emphasis added):

In civil aviation, 14 CFR § 43.10 governs disposition of life-limited aircraft parts.64 The FAA has also published a Best Practice Scrap or Salvageable Aircraft Parts and Materials.65 The Best Practice recommends mutilation of scrap parts and materials to prevent misrepresentation. Mutilation includes grinding, burning, removal of a major integral feature, permanent distortion of parts and materials, cutting a significant size hole with a cutting torch or saw, melting, sawing into many small pieces and removing manufacturer identification, part, lot, batch and serial number. Removing the identification and part markings without rendering the part useless is not an acceptable option and increases the opportunity for counterfeiting.

The US Department of Defense cites a number of SAE AS standards when controlling counterfeit parts, including AS 6081, which discusses an actual test if marking (such as red dykem) had been previously removed to make the counterfeit part appear legitimate:

External visual inspection may reveal evidence of remarking where the original marking was removed by chemical or mechanical means, and the marking area was resurfaced or masked with a material that may or may not match the original surface. Any removal of the original surface finish, laser markings, or ink markings is an indication the part may be fraudulent or counterfeit.

To make sure I wasn’t going completely mad, I spoke with an auditor for the US Air Force, who told me that, no, dykem wouldn’t be sufficient.

The “permanently marked” requirement is violated if thinner can easily remove the red dye on the hardware item.  An AS9100 auditor should issue a major nonconformance for such a practice.

When I reached out to the FAA, via the FSDO in Florida, they just reiterated the Appendix E of AC 21-43 (quoted above.)

In short, Mr. Cressionnie is wrong — so wrong, he’s putting at risk the entire AS9100 user base by spreading an ill-informed personal opinion that flies in the face of everything we know about counterfeit part control. He’s so wrong, he is contradicting his own company’s procedures. If aerospace was only interested in marking scrap, and not preventing it from being used outside the supply chain, it would have never added the additional 8.3 language to begin with.