Because of the COVID-19 pandemic, the world’s marketplace for personal protective equipment (PPE) has become a sewer of organized crime and amateur grifters. Social media is awash with deals on nitrile examination gloves, 3M respirator masks and other critical products necessary to save lives and prevent contagion. Nearly all of these deals are scams.

Now my radar for sensing scams is pretty high, but this one blinkered me. I got caught up in it only because it came in from an unexpected vector: through my family. A friend of my wife approached me and said he was currently selling gloves and masks to “over 4,000 US hospitals.” He was a trusted friend, so I had no reason to disbelieve him. He wanted me to join his PPE sales group, and specifically get me to use my industry contacts to win him more business. In return, I’d get a tiny percent commission, but on sales that he alleged were worth more than $1 billion, it was not chump change.

At no point did I ever believe he was going to win a deal worth $1B, nor was I about to hand over clients of mine without his team providing some proof they could close a deal. So my “radar” was still on, but I’m now both embarrassed and frustrated that he even got that close.

Of course, it proved to be a scam. He claimed to be working for a guy in Fort Lauderdale named John Howard, who owned FMT Capital. Things started smelling “off” when I researched Howard and found his house in Ft. Lauderdale was located in a shitty neighborhood and had less value than my own. Yet I was told he was a billionaire investment capital expert, with a Miami warehouse currently holding billions of units of product.

Within the first week, I put together a deal that would have connected Howard’s group with a hospital buyer in the UK. They claimed to be wanting to buy 2.5 billion gloves, a massive deal. I was told the deal was closed, and was getting nearly hourly updates. Then, the phone stopped ringing, and I knew what happened. The deal was dead. No explanation.

This repeated for about four more weeks, until I finally confronted the group with their inability to close deals. I told them that in my industry, if you lost a billion-dollar contract, you had a post mortem meeting and assessed what you did wrong. These guys were only interested in talking about buying boats and investing in gold bullion. It was a certifiable shit-show.

I then said that if I was going to start offering PPE through my network, we needed to ensure we had authentic product. I was told “don’t promise that,” and at that point I thought I knew what was up. These guys were trying to trade in counterfeit product. I started taking notes, screencapping conversations, and saving everything immediately.

So I finally asked them how many deals they had actually closed, they admitted it was ZERO. They had never sold to one hospital, never mind 4,000. In fact, it was not even clear that John Howard was ever involved, since I was prohibited from speaking to him, and he never once entered into a call or conversation. For all I know, they were using FMT Capital’s name without his permission.

I exited that group, but was approached by another on LinkedIn: Global Protection Gateway, out of the UK. These guys had actual “allocation lists” that they claimed were production runs contracted specifically for them by the factories responsible for manufacturing Cranberry and Cardinal gloves, and 3M masks. They had numbers: prices, volume, capacity. They also seemed legit.

No, they weren’t. Soon enough it was clear that they, too, were not closing deals. Again, I never gave them a single client of mine, waiting to see if they were on the level. Within a few weeks, I found them dealing in quantities that were impossible. Here’s one message they sent me, claiming to have 5 trillion Cranberry gloves on the ground in the USA: 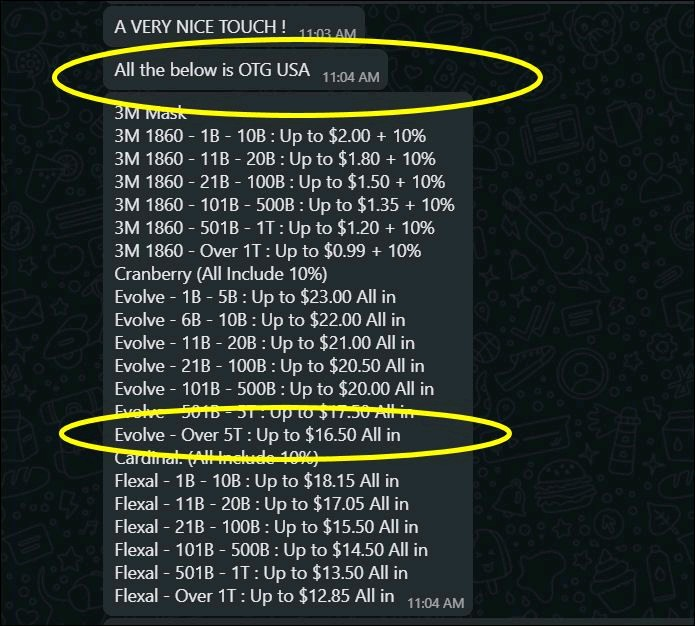 I confronted them, and rather than have a suitable explanation, they reacted with hostility at the question. Their rep Tony Gutierrez told me he had “clients coming out of his ass,” and was so busy closing deals that he didn’t have time to waste justifying these deals. If I didn’t believe him, I could walk. Obviously, that was not the right posture to take with me, a guy who runs whistleblowing programs.

I kept on the pressure and eventually Gutierrez admitted that GPG had never closed a single “OTG” (on the ground) deal. Then, confronted with the fact that they repeatedly were found not to have the items on their alleged “allocation list,” they wound up removing it entirely from their website. Apparently, that was fake, too? Who knows.

Somebody Call The Cops

So I started talking to law enforcement. In the US, I contacted the FBI. They did an hour-long interview with me, and I explained everything from my copious notes. I then filed official reports with the Florida State Attorney General. I did the same with UK counterparts. During this process, I was learning the real scam. But even the Feds only had a partial picture.

It wasn’t that these guys were trying to sell counterfeit product at all; instead, the same is just a modernized version of the old “Nigerian fax scam,” whereby someone claims to have something of value — an inheritance, for example — and you have to hand over bank information to get it. They take that bank information and then drain your account dry.

In the PPE market, it’s a bit more convoluted. During typical PPE transactions, the customer (“buyer”) will be asked to provide a BCL (bank credit letter), POF (proof of funds), or LOC (letter of credit). They may be asked to engage in a fake “A2A” (attorney to attorney meeting). All of these are attempts to extract the financial records of a potentially wealthy buyer.

To jack up the likelihood of a big payday, the sellers then promise quantities that cannot exist. When I got into this just a few months ago, the top quantity being traded was in the 2.5 billion unit range, something that seems reasonable. (In retrospect, it’s not.) Now the quantities being offered are 500 billion to “5 trillion.” Worse, these sellers claim to have the material OTG (on the ground), in warehouses in places like Miami, Los Angeles or New Jersey.

I did the math. There are no warehouses anywhere on the planet, much less in the US, that can hold that quantity of material. Boeing would have to empty all the airplanes out of its warehouses — which are the largest in the country — and hand them over to some guy on LinkedIn selling products. That doesn’t happen.

Furthermore, the glove manufacturing plants only have, at the most, a capacity of 90 billion gloves per year. Those are mixed between all types, too, not just the nitrile gloves being sold on social media.

To defend these fantasies, groups like Global claim there are unnamed “Saudi prince” investors who have the material hidden in warehouses, presumably in Saudi Arabia or Dubai. When I heard that, I knew we were right back to the Nigerian prince fax scam approach

Guess what: Saudi princes don’t have these warehouses either.

So how does the “BCL scam” work? With these letters of credit, the scammer can then move on to make investment deals entirely outside of the PPE world, and wholly outside of the knowledge of the bank or the people involved. They can gather up investors for some unrelated project — also a scam — using the letters of credit as collateral. Banks will sign onto loans and mortgages and other deals, viewing these official BCLs from other banks as legitimate, which they are. This converts the BCLs into cash, which the scammer can make disappear in foreign accounts. In some cases, the banks are left on the hook, and have to use insurance to pay for losses. There are even complicated scams whereby the scammer himself gets the insurance money, as well as the illegally-obtained cash. In cases where the BCL was used to trick investors, those investors are just out of their money, period.

(Here’s one such example.)

There are other scams, too, though. In some cases, sellers demand an up-front deposit, then deliver boxes filled with cardboard instead of gloves. In other cases, people make shaky, handheld videos of “factories” or “warehouses” that claim to have gloves, but may are just cheap sets, or videos of empty boxes. Others still use their own employees to pose as “attorneys” who try to convince a dupe to submit BCLs or wire money to an offshore bank as an “escrow” deposit. You’d be surprised at how many people fall for this.

Now it’s not clear if groups like Global Protection Gateway are in on the scam, or if they are victims of it. They might be so blindingly stupid that they really think there is product “OTG” in the billions, and their desire to land “that one big deal” blinds them from the simple math of calculating the square footage needed. In my case, I literally told them there is no way that product exists, and they fought back. But someone higher up the food chain might be using idiots like GPG to suck up bank financial information; given their level of incompetence, it seems unlikely that groups like GPG are, themselves, criminal masterminds. But stranger things have happened.

We have opened the world’s first international PPE Fraud & Whistleblower Program, allowing those victimized by PPE scams to enter details and submit them to us. (Anonymously, if they like.) With that, we can investigate and then — if the issue appears real — forward it to law enforcement, government regulators, and agencies like INTERPOL. We have years of experience with the ISO Whistleblower Program, so the infrastructure, procedures and contacts were all in place already. This was an easy lift.

It’s already borne fruit. We have filed three cases with the Florida State Attorney General (as in everything else, Florida is the center of PPE corruption), one in New Jersey, and one in the UK. A new case just came through as I am writing this, and seems like it will end in arrests in Florida.

The values of the attempted scams are so high — often billions of dollars, if not trillions — all but ensure any arrests will be felony-level, and result in long jail terms if the scammers are convicted. It doesn’t matter if the amount are ludicrous (no one has trillions of dollars to spend on a single purchase on LinkedIn), nor does it matter that they may not have been after the actual money, but only the BCLs. What matters is that they misrepresented themselves claiming to have “trillions” of products for sale, when they actually had none.

So while Oxebridge is still just an ISO consulting firm, and I won’t be publishing a lot of PPE scam-related material here, rest assured that we are working on this problem to the best of our ability.

I also invite US law enforcement agencies, regulators, lawyers and others to reach out if they want assistance, or if they can assist us to improve the reporting system on our end.

Again, click here to access the PPE Fraud & Whistleblower Reporting System. It’s open for all nations to use, not just those in the US.