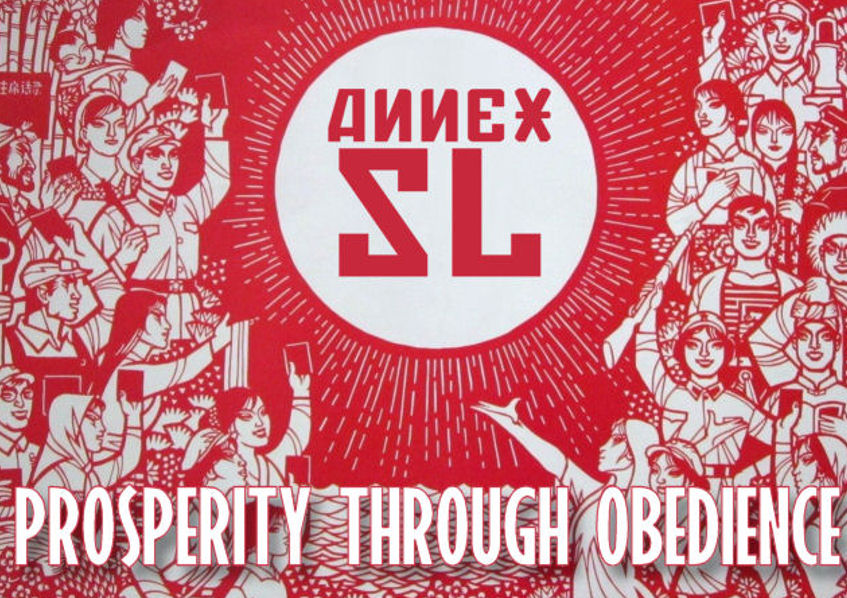 As I mentioned recently, tracking down the actual authors of ISO’s much-maligned “Annex SL” mandate is a tough job. There’s no official roster anywhere, and the best we can do is scour internal ISO memos and some public comments to develop a rough list of those that were primarily responsible.

Annex SL is controversial because it was not written by any one ISO Technical Committee, but instead by the ISO Technical Management Board, and its spinout group called the Joint Coordinated Task Group (JCTG). Neither the TMB nor the JCTG were required to follow rules demanding that ISO standards be developed through consensus of ISO member nations, nor per any other international regulations. This is because the TMB is not a Technical Committee, and those rules only apply to TCs.  Through this arrangement, ISO was able to force content upon every TC through Annex SL, without full participation and approval of the ISO member nations. The TMB and JCTG insist the TC’s contributed and voted, but in fact all that happened was that the text — written by the TMB/JCTG — was circulated for non-binding polling. This polling was entirely optional, so the subsequent ISO chest-beating about them having done so is disingenuous at best. Eventually, they ignored the comments received from TC reps anyway, so it was all kabuki.

So how many of the 163 ISO member nations did participate in development of Annex SL? Not a lot, it turns out. In fact, only 10 — as in ten — had a role in developing content that would later be forced into every ISO management system standard, ever. Those nations were Austria, Germany, Japan, Netherlands, Norway, Spain, Sweden,Switzerland, UK and the USA, which if you put on a map would mean the “international” participation in the development of Annex SL would look something like this:

This means that entire continents like, say, South America, Australia and Africa, had no say in Annex SL, and that all of Asia would be excluded, too, if one single person from Japan hadn’t shown up. He single-handedly represented billions of people, so he must be pretty filled with himself.

Of the participants, a single entity — registrar BSI — held overwhelming sway, with at least five active participants, including the usual suspects Mick Maghar and Charles Corrie. Both Maghar and Corrie are known for pushing BSI’s agenda within ISO, which tends to allow such things.

When analyzing the participating agents by their industry role, we find that the entirety of the group was comprised of only three “interest categories”: private ISO consultants, career standards body developers and representatives from registrars (CBs) and accreditation bodies (ABs). Most of the private consultants, mind you, had worked at some time for a CB, so they have feet in both camps. As for the “career standards body developers,” these are people have worked nearly entirely for ISO or some other national body (such as ANSI) developing standards that they would never have to use themselves. 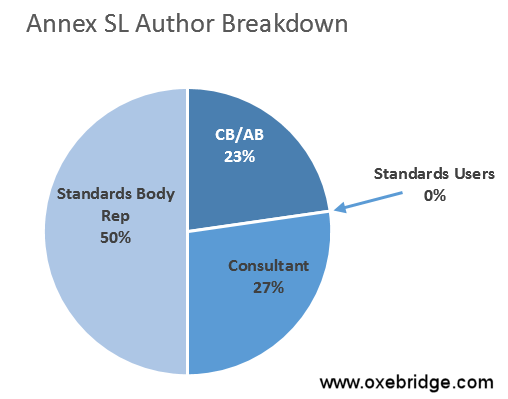 What we find missing from that population are actual industry experts and standards users. In other words, the most critical and important stakeholder group of all: the customers. These are the people who could have advised Annex SL on the real-world practicality of the nonsense they created, and perhaps steered them clear of things like creating a new phrase (“documented information”) to use existing words (“document” and “record”) that have successfully been used by people for literally thousands of years.

Now, if Annex SL had been developed by the Technical Committees, specific rules would have been invoked to ensure a spread of interest categories so that there would be no dominance by any specific category, and to reduce conflicts of interest. But the TMB — which is comprised of a fixed number of 15 national representatives, leaving the other 148 nations literally prohibited from participating in the TMB — doesn’t have to follow those rules, so every ISO management system standard ever published can be altered by less than two dozen people from only six percent of the world’s countries. Furthermore, the TMB can violate with abandon the rules ensuring that developing nations get a fair say in things, as we see that not a single developing nation participated in Annex SL.

Let’s not even get into how ISO’s development processes are nearly overtly racist, operating under a de facto “whites only” atmosphere that appears to have been borrowed from 1948 South Africa.

Collating information from, as I said, a handful of official ISO internal memos and a few published articles, we are able to collate the following list of actual Annex SL authors, along with their employers and industry role.

As mentioned, we immediately see that BSI and the UK had an extraordinary influence, followed by Sweden and Switzerland. We also see that half of the participants fell into the “career standards developer” category, a I mentioned they are folks who work, formally, under a standards body or for ISO itself. While that may help them have an understanding as to the manufacture of standards, it doesn’t help them if they have no experience beyond that; you don’t let a typist develop your quality system standard, even if they are a really great typist.

If you dig into the resumes of these career standards jockeys, you find little else. Sophie Clivio, one of the most powerful people within the TMB, worked for IBM for just over 4 years, before spending the next 24 years working solely for ISO. This gives her exactly no practical experience as a standards user, and yet she steers the ship.

Stefan Tangen of Sweden came out of university and immediately landed a job with ISO, where he has spent the last 12 years, having no experience at all as a standards user.

Ernst-Peter Ziethen of Germany has worked with German standards body DIN for a mind-boggling 42 years, making me think there’s a typo in his LinkedIn profile. He, like the others, has never really had to eat ISO’s dog food.

And so you have the show being run by stage hands who’ve never sat in the audience; car salesmen who’ve never learned to drive. This cult — and, sweet Mary, that’s nearly almost what it is — ensures that none of them could ever even recognize the notion that they should try to work with true industry stakeholders, because it’s the only professional reality they have ever known. They feed each other, and exist only in the sphere created by each other. ISO’s bureaucratic hierarchy ensures they are protected from users and industry representatives, so they never personally hear anything approaching criticism. They are left with their own self-created, and self-supporting backpatting, and are utterly tone deaf to their ignorance. This is why Anne-Marie Warris can, without a shred of self-awareness, suddenly complain that auditors cannot interpret her Annex SL work; only blinding one’s self from customer feedback could possibly explain such astounding ignorance.

The troubling aspect for users is, of course, that they have yet again been left outside the ISO machine, and are forced to utilize a defective tool developed outside of international trade rules.

Some nation needs to file a formal appeal against ISO with the WTO. It’s unlikely to be the US, since such a move would need to go through ANSI and that means going through Steve Cornish whose name appears on that list above. ANSI is not about to admit that it contributed to a violation of the WTO’s Technical Barriers to Trade regulations, so they are not about to stand up to ISO on this issue. No, it will need to come from some other nation.

Now word comes in that both the latest ARC Automotive airbag failures and the Samsung Note 7 debacle happened under ISO certifications, joining the BP Deepwater Horizon oil spill, Takata airbag deaths, PIP breast implant scandal, and a host of other deadly product-related accidents. At some point someone — somewhere — is going to have to hold ISO accountable. Annex SL will increase risk, not reduce it, and the authors should be denounced publicly for creating a disastrous product in violation of international trade regulations.