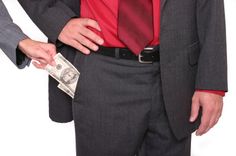 I’m not being cagey with the question mark in the headline, but rather presenting a sincere question. It does appear that EAGLE Certification Group has scrubbed its “Consultant Preferred” program, originally launched last year after Director of Business Development Ben Marchant came on board. Not only that, their site has been cleaned up of (almost) all evidence of any consultant references.

I say almost, because they didn’t do a good job of … well, whatever they tried to do. Yes, searches for “preferred” or “consultant” or “partner” come up empty, with the exception of older material that pre-dated Marchant’s boneheaded decision: offer a “preferred” label to consultants who can deliver a minimum of three clients to EAGLE for ISO 9001 certification services. Previously, Marchant just dug in and defended the move. Now it seems the certification body has backed off.

But it’s not clear, and EAGLE isn’t answering email questions about it. Thus, the headline.

But some lingering pollution remains on the EAGLE website. A few more clever searches reveal that some older material pops up, including the names of some of the consultants EAGLE had “preferred” before using the actual word. A URL analysis shows one link previously dedicated to “J. Weiland Consulting“, under the subdirectory “business-partners”, although the page information itself comes up empty:

A check on Joe Wieland, the man behind the referenced consulting firm, reveals that at least four of his clients were then certified by EAGLE, at least according to current entries in the IAAR database: Tomak, United Mail, Omni Technologies and Four Seasons Environmental.

ISO 17021 rules prohibit accredited CBs from getting too cozy with consultants, in order to avoid conflicts of interest when it comes time to audit them. Marchant’s program for EAGLE would have appeared to violate these rules, by directly offering a quid pro quo of “preferred” status to any consultant that delivered at least three lucrative contracts. An argument could thus be made that EAGLE’s objectivity when auditing such a consultant’s clients would be jeopardized on the basis that the consultant is effectively conducting “sales” for EAGLE.

Marchant claimed the only way EAGLE could assess a consultant is by discussing the consultant’s performance with an EAGLE client. I argued that was ridiculous, since there are many other ways to assess consultants that don’t require them to deliver three or more contracts.

The program isn’t without precedent, and seems to have been a half-assed lifting of a similar program by the larger registrar NQA-USA. In the NQA case, they offer a label of “Associate Consultant” to any consultant that have “3 or more NQA client references.” It’s the same ugly game, but at least NQA appears to have run their language past a lawyer. Isntead of demanding outright that the consultant deliver three contracts, NQA just wants three “references.” Clever.

A strict reading of ISO 17021 would still prohibit a CB from labeling any consultant an “associate” or “business partner” since it implies (if not outright states) a close financial relationship. It’s hard to claim to be objective with a “business partner.” But ANAB reads these things with one eye shut, and the other eye on their yacht payments or something, so we can’t expect them to step in. At this point, the bar is so low, every day ANAB doesn’t just throw their hands up and start accepting gold watches as payment for accreditation, we are ahead.

These kind of things make it easier and easier for the self-accredited certificate mills to operate, since they pretty much have the same relationships between certification and consulting, they just do it more openly. As a result, the accredited CBs are killing their own future, obsessed with a short-view strategy that ensures they empower their competition, while diluting the validity of ISO 9001 as a whole.

This is also why it’s important to have independent investigations and reporting on these subject, such as that done right here at Oxebridge. When we report on it, sometimes — not often — but sometimes, … it gets fixed. In this case it appears EAGLE was embarrassed enough to at least erase most of the material from their site, if not scrap the program entirely.

Now maybe NQA could step up and do the right thing?