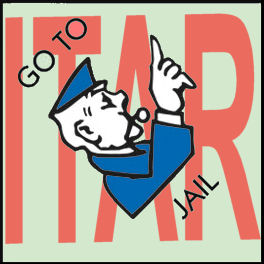 First, remember that I don’t sell ITAR consulting services, so I have no profit to gain from causing a panic in this area. But, as I warned before, if you’re working in aerospace or doing any machining whatsoever with defense, aviation or aerospace companies, then the ITAR rules probably apply to you. Sure, you’re insisting they don’t, and you are gambling with the life of your company by doing so.

Now meet R. E. Darling Industries of Tuscon AZ, a machine shop of less than 100 employees that happens to have the good fortune of making parts for aerospace and defense. Darling thought it was doing the right thing and voluntarily disclosed of ITAR and the Arms Export Control Act (AECA),  after it hired a private consultant to perform a compliance audit. But as is becoming more common, voluntary disclosures can lead to the Dept. of State being less than forgiving. Darling was hit with a $400,000 civil penalty as a result.

In DoS’ defense, however, the Charging Letter issued to Darling does indicate the violations were going on for a decade or more, and so perhaps a $400K hit was their way of going easy. They have agreed to accept half that amount if Darling shows progress, and Darling also dodged a far more serious bullet of having the company “debarred” entirely from providing defense articles.

Apart from the findings that Darling had exported a rubber material used as insulation in missile systems, the company was also cited for multiple lapses regarding the “Empowered Official” rules. Those require the company to assign a member of management the role of Empowered Official, and then have that person be fully trained and knowledgable on ITAR.  Of the companies I have seen claiming ITAR compliance or, worse, “ITAR Certification” (which doesn’t exist), this problem is rampant. I ask them “who’s your Empowered Official?” and they have no idea what I am talking about. As the Darling case proves, that’s an expensive mistake to make.

The Darling case should be a wakeup call to industry. ITAR noncompliance is viral, driven by a number of factors, the most prevalent of which is just outright ignorance. Companies don’t know anything about ITAR, and refuse to spend money to find out what it means for them. Then, they get caught and fined and face total shutdown later. As always, ignorance of the law is no defense.

Worse, companies pretend to be informed, and come up with the most outlandish explanations for why they are violating ITAR. “It doesn’t apply to us,” “we don’t ship overseas,” “we are OK because we have a log in the lobby for visitors to sign.” The US Department of State doesn’t care if you think you can wriggle out of this, as they remain unimpressed by displays of gymnastic prowess.

The thing is, ITAR compliance isn’t even expensive. For a few thousand bucks — and by the way, Oxerbidge doesn’t provide this, so I am not upselling — you can be fully compliant. Period. The documents can be generated in a few days, and training done in a week. That’s it.

As I said, Oxebridge doesn’t provide ITAR consulting, but I do recommend the services of Aerospace Exports Inc. (AEI) who you can contact here.