Oxebridge has filed a new complaint against the certification body Quality Austria and its accreditation body, Akkreditierung Austria, alleging the two companies not only ignored prior complaints but have since worsened the conflicts of interest originally alleged. The scandal now involves companies certified to the aerospace standard As9100, as well as to ISO 9001.

A complaint was filed in late 2019 against Quality Austria after it was discovered it had issued an ISO 9001 certificate to its own regional office in Qatar. That office then engaged in open consulting of ISO 9001, and then issued official certificates to the same clients. The arrangement was signed off by Quality Austria VP Eckehard Bauer, who allegedly received “five-star vacations” from the Qatar office.

Bauer refused to recuse himself from the complaint and personally closed it without explanation. Oxebridge then escalated the matter to Akkreditierung Austria, adding new information when it was discovered that one of their auditors, Mr. Adolf Kerbl, had also received a paid vacation with “female companion” in Qatar. Akkreditierung Austria ignored the complaint entirely, and the matter is now before a court in Austria. Both firms are alleged to have succumbed to illegal bribery in order to ignore Quality Austria’s violations.

New evidence has now emerged that Quality Austria and Bauer continued to engage in the very same practices, and have escalated them. Worse, both Austrian firms are directly working with the Russian company Rostec, which is subject to international sanctions.

RT Tech Priemka then gave itself an ISO 17021 accreditation certificate, as well.

Quality Austria went on to use its self-certified offices in Russia to certify other Rostec companies to AS9100. Official IAQG OASIS records show Quality Austria certified Rostec subsidiaries Technodinamika, United Engine Corporation, Avia Agregat, and others. 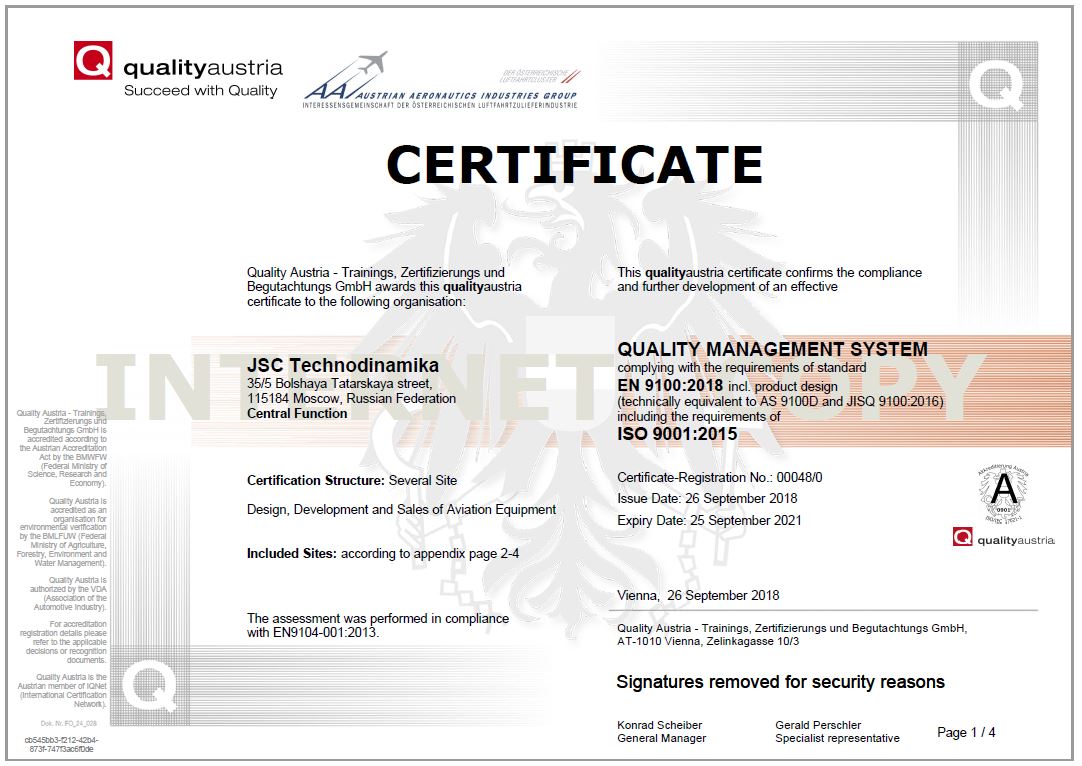 Official AS9100 certificate issued to Rostec company Technodinamika, despite international sanctions. The certificate features the logos of both Quality Austria and Akkreditierung Austria.

Rostec is also under far stricter US sanctions, and because the certificates were performed under the oversight of the International Accreditation Forum (IAF), which is based in Delaware, the parties may be held accountable for violating those sanctions.

Quality Austria is featured prominently in the November 2020 issue of Russian Business Guide, a pro-Russia journal that publishes material in support of Russia’s forced annexation of Crimea, the very event that forced the EU to impose sanctions on Rostec. In an article entitled “International Cooperation and An Integrated Approach to Quality Management as a Driver For the Development of Russian Industry,” Quality Austria is specifically called out as a key partner of Rostec, and a significant means through which Russia obtains foreign assistance in industrial improvements through information transfer:

RT-Techpriemka JSC closely cooperates with the Austrian certification body for management systems and personnel Quality Austria to build quality management processes at the level of international industrial organizations. Exchange of experience between specialists of organizations allows solving a number of strategically important tasks, including strengthening cooperation between countries; improving the quality of products, production, production environment; acceleration of innovation implementation processes; increasing the volume of exports of goods by ensuring the highest quality products, etc.

The article makes no attempt to hide that Quality Austria’s Rostec partner certifies other Rostec companies, and then boasts about how Quality Austria and Rostec jointly celebrate the issuance of ISO certificates to those clients:

Solemn ceremonies for presenting certificates of compliance with international standards are often held jointly by the certification body Rostec-Certificate and partners from Quality Austria at the central office of Rostec. This not only emphasizes the importance of passing the certification procedure, but also speaks of a high assessment of the prospects and opportunities for business development that companies get a& er receiving international certificates.

The full RBG article may be read here.

The ongoing scandal reveals just how the IAF and its member bodies operate with complete disregard of international law. Quality Austria and Akkreditierung Austria are both obligated to operate in accordance with the Austrian law Bundesgesetz über die Akkreditierung von Konformitätsbewertungsstellen (Akkreditierungsgesetz 2012 – AkkG 2012) and EU Regulation EC No 765/2008 of the European Parliament and of the Council of 9 July 2008. As part of the IAF both are also obligated to follow ISO 17011 and ISO 17021 respectively.

The IAF and its regional bodies all refused to investigate the bribery allegations against Quality Austria and Akkreditierung Austria. To date, Quality Austria still lists the Qatar agents alleged to have offered the bribes as their official Middle East representatives.

Giving support to Rostec and the companies under international sanctions brings new weight to the allegations of corruption by the two companies, and may introduce new criminal charges against them.

The scandal also raises new questions on just how these arrangements have been ignored by bodies such as the IAQG, which oversees the AS9100 scheme, and IQNet, a certification body cabal whose logo appears on many of the Quality Austria certificates.

The IAF is represented in Asia by the regional body APAC, and in Europe by EA. Both bodies have some oversight of Russia, which is seen as having feet in both Asia and Europe, but neither has acted on the scandals to date. Both APAC and EA are aware of the self-certification problem in Russia, as well as the use of Rostec CBs in certifying Rostec companies.

The practice in Russia of CBs certifying themselves or each other appears to be widespread. Oxebridge previously filed a complaint against the UK-based CB URS Limited after it was found they had granted ISO 9001 certification to the CB Russian Register. URS initially denied the complaint, but then withdrew the ISO 9001 certificate for Russian Register. That certificate had existed for years, and witnesses told Oxebridge that both APAC and EA were fully aware of the arrangement.

The new evidence against Quality Austria and Akkreditierung Austria came as Oxebridge is investigating wholesale corruption in the Russian ISO certification market. Other CBs found to have worked with sanctioned companies include DQS, Bureau Veritas, and TUV, but it is not clear if they did so prior to the sanctions. Many of the certificates hold the logo of the German accreditation body, DAkkS.

Oxebridge is exploring the feasibility of filing a Foreign Corrupt Practices Act complaint against the IAF with the US Dept. of Justice. The IAF is based out of Delaware, and thus subject to the US sanctions obligations, but is managed by a Chinese national top executive. Oxebridge has written to the IAF demanding it provide a justification for its inaction on the sanctions, prior to any such filing.