The Tennessee company Perceptics is facing full debarment from all US federal contracts following a massive cyber attack which exposed company records, and which is now accused of “lack of business honesty or integrity.” According to the Washington Post, “The rare punishment temporarily prevents the longtime contractor, Perceptics, from doing business with the federal government and could land the company on a years-long government blacklist.”

Perceptics was hacked in May, and gigabytes of corporate records and files were released. The company provides automobile license plate recognition systems and was a prime contractor for the US Customs and Border Patrol. The data included personal information related to travelers.

It is not clear yet how the hack and the US suspension are related, but it was previously reported that Perceptics copied traveler’s personal data from CBP servers onto its own without authorization; that data was then exposed from the hack. It is presumed the suspension came as a result of CBP’s subsequent investigations.

Nevertheless, Perceptics continues to hold ISO 9001:2015 certification issued by the registrar ABS-QE and accredited by ANAB. According to ABS-QE records, the company was originally certified in February 2008 and has maintained that certification consistently, despite the widespread reports of problems with Perceptics.

In 2012 the company boasted of how it passed a periodic surveillance audit by ABS-QE “without findings or corrective actions.” Oxebridge has argued that the growth of “zero nonconformity” audits is due to “drive-by audits” performed by registrars who ignore quality-related problems in order to keep clients. 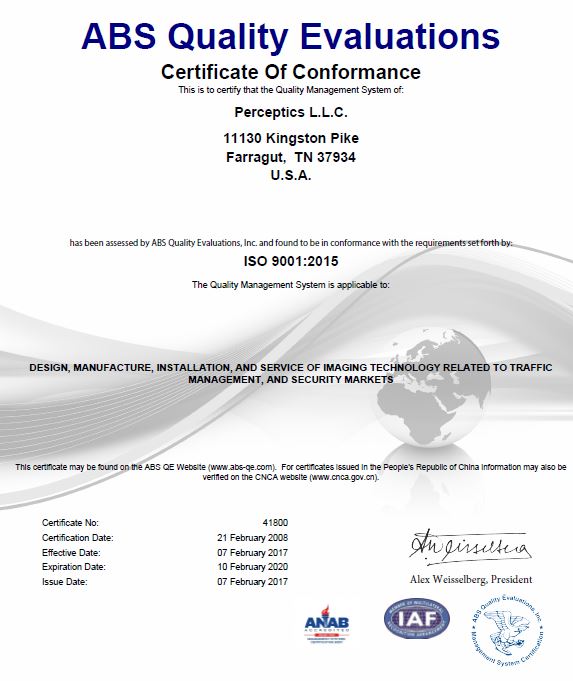 The 2012 press release suggests Perceptics went above requirements by undergoing semi-annual ISO 9001 audits, rather than annual, but that option is actually available to any company. The number of audit-days per year to conduct is largely fixed by IAF rules, but may be split into two 6-month visits if a company elects; it does not increase the actual number of audit days. CBs prefer semi-annual audits because they can charge clients more money for the arrangement.

The Washington Post reported that suspensions such as those which Perceptics now faces are rare and “generally come only after an accusation of major wrongdoing, such as an indictment against executives or a crime against the government.”

ABS-QE had previously certified the oil industry company Hercules, which experienced a blowout diverter explosion similar to the one that caused the Deepwater Horizon disaster. ABS-QE did not withdraw the certification after the disaster, and Hercules eventually dissolved.

ABS-QE had also issued ISO 9001 and “Responsible Care” RC14001 environmental certification to a company that later faced an oil tank explosion and released toxic benzene into the atmosphere. Residents of Deer Park TX were advised to seal their homes during the incident to avoid health hazards. Despite the disaster, current records show ABS-QE continues to certify the company.