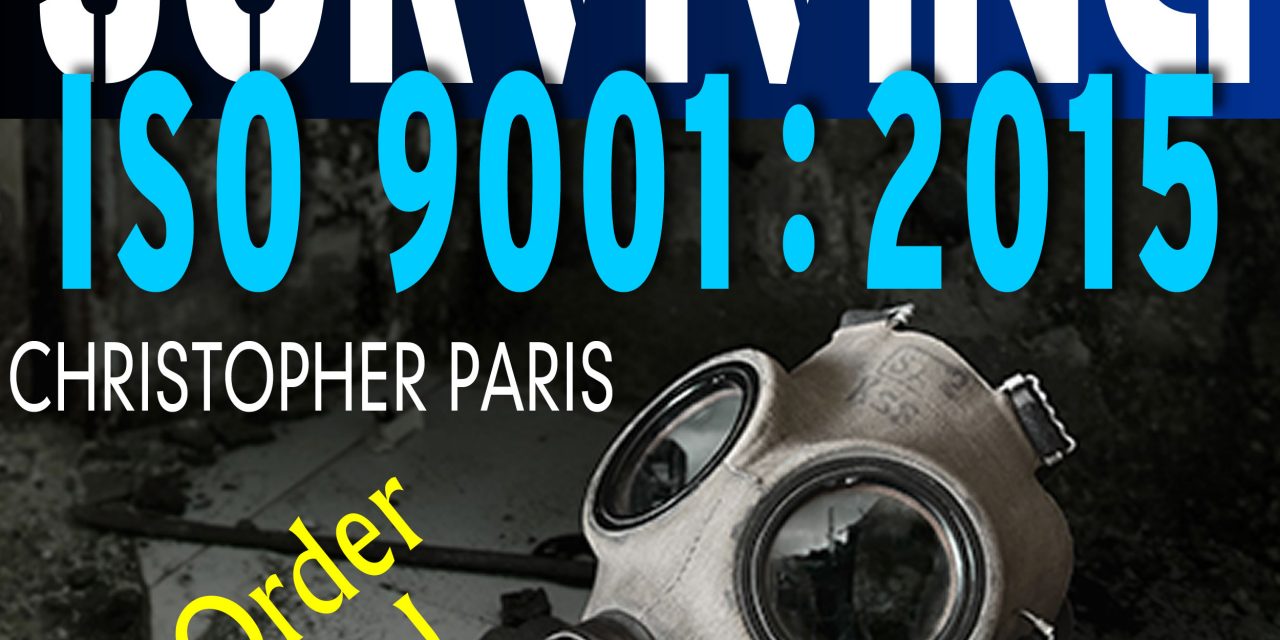 As my close friends who subscribe to the Oxebridge Report already know, I’m about to release my first ISO 9001 related book (if you don’t count Eyesore 9000 and DumbAS 9100 ), called Surviving ISO 9001:2015: What Went So Wrong with the World’s Foremost Quality Management Standard and How to Implement It Anyway.

Recently I leaked a $30 Pre-Order Edition offer only for readers of this site through the O-Report, which allows people to purchase the book now, before it’s finished, at a 50% discount. In exchange, buyers get a special Pre-Order Edition that will include additional content which will not be available in the final edition. Which means, in effect, I started selling a book I haven’t even finished yet, proving yet again that when it comes to balls, I must have at least three of them, and they’re made of solid zinc copper alloy. Heck, I ran for TAG 176 Chairman and wasn’t even a member, so it’s not the first time I’ve done something nobody else has in this profession.

Meanwhile, mis compadres profesionales have a head start, since nearly every one of them had started writing their books before the standard was even ratified and published. Like a dummy, I waited until (a) it was actually published and (b) I had studied the thing and actually implemented it at least ten times with pilot clients. This way, I thought, my book could be based on practical experience, rather than guesswork and regurgitated ISO talking points. So my friends are making mad bank selling their books, while I’m sitting here studying like an idiot.

Now it appears that hard work panned out, since the pre-order sales haven’t been too shabby. In just a few weeks, with a tiny leak to only a few hundred people, we’ve pre-sold over 100 copies of the thing. It also means I need to focus like a laser on finishing it, which is exactly what I’m doing. I’ve cleared the decks and have stopped all consulting work until it’s done. Target date for publication is May. At that point, the pre-order folks will get their “Expanded Edition” and it will go on sale somewhere (Amazon or Pornhub, haven’t decided yet) and everyone else will have to pay $60 for something that contains less content. Snooze, you lose! Shot of the draft table of contents on my desk, with the tools necessary for creating such masterpieces.

The book is, according to those that have seen it so far, like nothing anyone’s ever seen in this field. Not only will it fully explain what the hell happened to make ISO 9001:2015 so controversial, it will then use that as a context on how to interpret the requirements for the purposes of tailoring an implementation. Then, it will present an actual step-by-step list of implementation activities, presented not in the sequence of clauses but in a sequence that makes sense, with separate steps for both manufacturing and service sector companies. The Pre-Order Edition will include a fourth part on upgrading existing systems to the 2015 version, which won’t appear in the final edition; I may be throwing in some other goodies as well, if I can figure out how to send chocolates in a PDF file.

Let’s be clear, though: ISO isn’t going to like the book. The CBs are not going to like it. I call them out on their mistakes, and then give practical advice on how to get around the various roadblocks and potholes they’ve put in the way.  I truly believe you cannot fully understand how to implement ISO 9001 if you don’t know what they were thinking when they wrote it, and what the auditors will be thinking when they come in to raid your donuts in the conference room on Audit Day.

I also think it helps to have actually worked with the standard before you claim expertise in it; a few of my colleagues have not implemented an ISO system in years, and yet keep writing books anyway. Weird.

So keep your eyes fixed to this site for updates and a final publication date, or if you want to skip the queue and get your Pre-Order Edition before anyone else, save yourself $30, and send a message to the ISO cronies that you prefer your ISO 9001 books to not be impossibly dull, click here for the pre-ordering info. Let’s see if we can hit 10,000 copies before I type “The End.” That will drive them nuts.

Now the next step is to figure out how to do an international book promotion tour without leaving my couch.