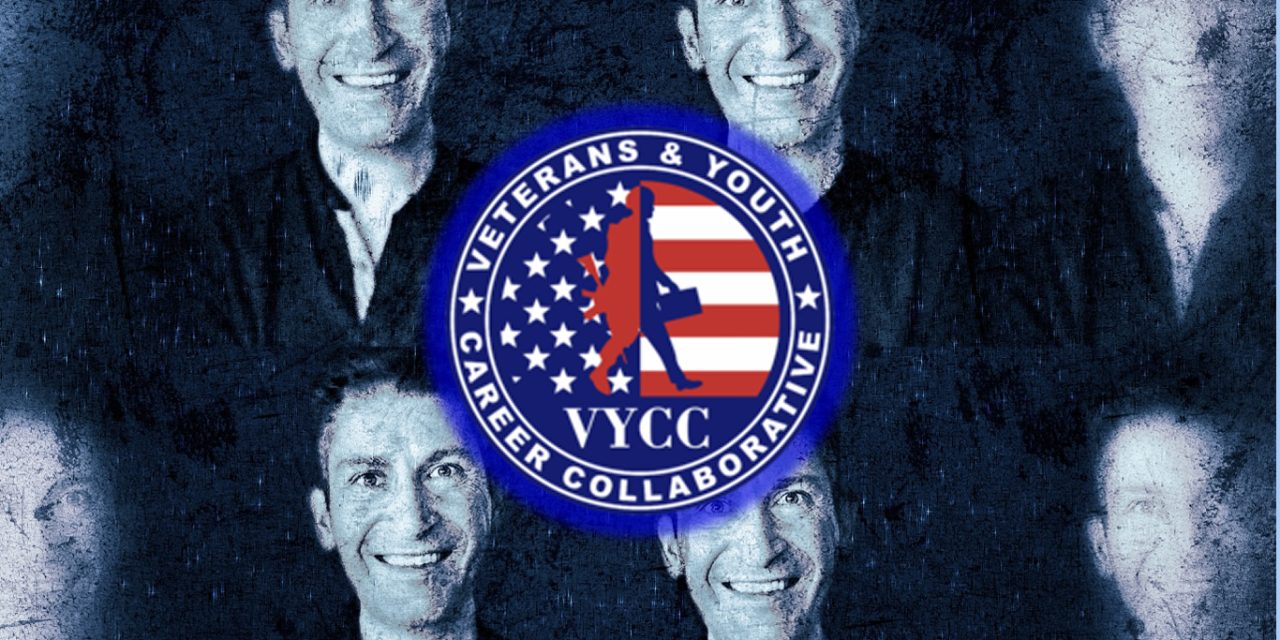 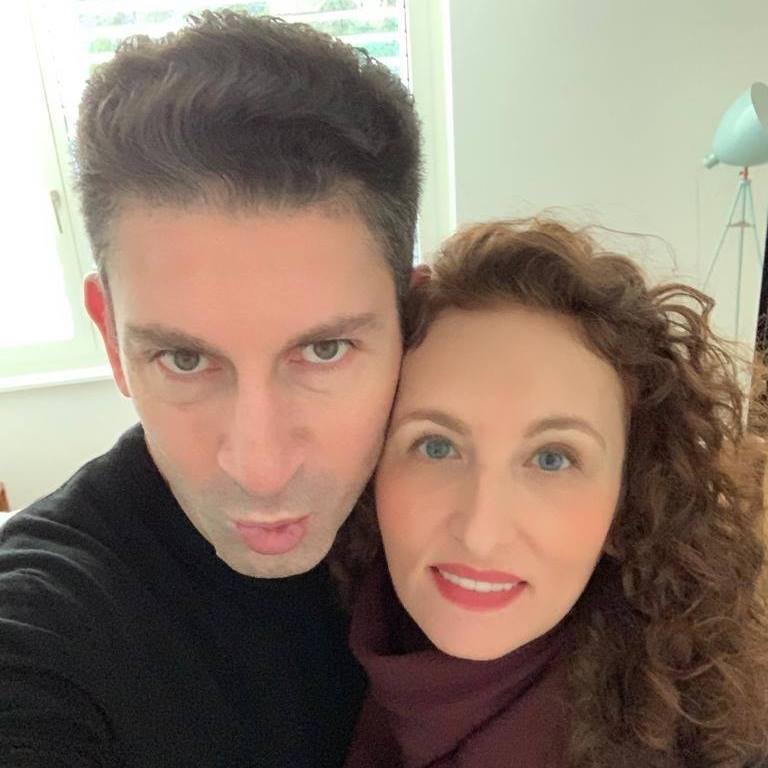 I wrote earlier about the ISO certificate mill “Skillfront” run out of Switzerland by the Turkish couple Erkan Sutculer and Yuliz Obergfell. At that time I really only focused on their fake ISO certificates and made-up corporate sponsors. I lost track of them shortly thereafter, only to suddenly have received a number of complaints through the ISO Whistleblower Program from victims saying they were ripped off by Sutculer and Obergfell.

First, you have to understand that a common trait for all certificate mill operators is that they tend to be pathological narcissists, obsessed with overcompensating for poor education and spotty work history by claiming magical powers and impossible credentials. Sutculer exhibits this, and then some. This clearly fake “testimonial” appears to have been written by Sutculer, posing as “Denis Neyson of Paragon Group USA” (no such person exists), heaping praise on himself:

[Sutculer] is a very down-to-earth, modest, and caring person and professional who puts the interests of his team and his students in front of his own interests. That’s precisely why he is so successful with his mission.

Remember, I previously reported how Sutculer invented a host of fake corporate sponsorships, so this kind of fibbing is par for the course.

So Easy, Your Dog Can Get Certified

Another shared trait of mill operators is how they like the sound of their own names. Just as a typical email from Daryl Guberman would feature his own name at least five times in the footer, Sutculer shows the same odd behavior. Look at this example from Facebook, which shows him dropping his own name eight times in a single post:

Seriously: his Facebook profile is a master class in narcissistic personality disorder, and you have to give it a look. Bring a bullshit poncho, because you’re going to get covered in the stuff.

Of course, Sutculer also has a webpage and domain name using his own name, which is equally creepy. I was wholly unable to verify his alleged “master’s degree in computer engineering.”

But it doesn’t stop there. Sutculer also created a cheap, knockoff of PMI’s “Project Management Professional” (PMP) certification. Using a company called the International Organization for Project Management (or “IO4PM”), Sutculer sells a $49 project management certification that anyone can get, since no one ever fails. Online reports by victims show them discussing how Sutculer lets you take the test an infinite number of times, so if you fail, you can keep going until you pass. Compare that to the real PMP certification, which can cost as much as $500.

Sutculer then claims his “competitors” (meaning PMI and PRINCE2) are “bureaucratic, complex, expensive and half-baked.” Typical bluster from a shitshow ringleader.

As like his mill brethren, he then tries to confuse potential customers into thinking that just by registering his company, he’s somehow “accredited.”

That’s not quite how accreditation works.

But he’s making money. Charles Hannabarger, the author of Balanced Scorecard Strategy For Dummies, seems to have bought every single fake cert that Sutculer offers, barring the insta-MBA.

Hannabarger is in good company, assuming he doesn’t mind hanging around a kennel and sniffing his colleagues’ posteriors. One Oxebridge reader managed to get a Skillfront “Accredited Professional Certification” credential for their dog, Evee: 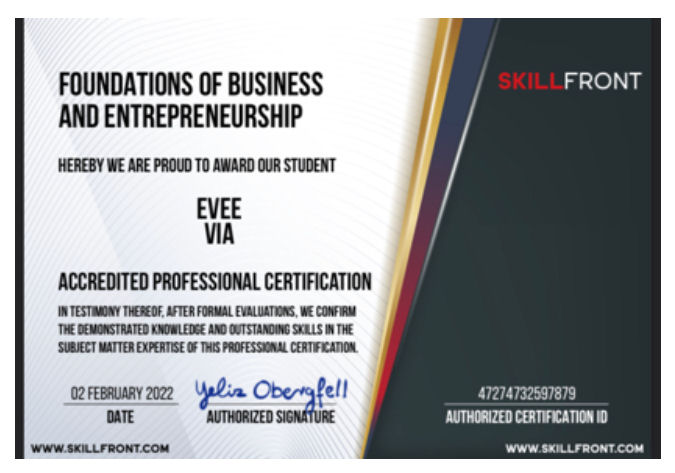 The reader told me, “you’d be seriously surprised how easy the questions are, took me only 5 minutes.” There was no requirement to submit an application or any professional experience or qualifications. The reader said they “just provided name and email. They then send you an access code to access the exam.”

Nevertheless, the certificate claims Obergfell had conducted a “formal evaluation” to verify “the demonstrated knowledge and outstanding skills“… of a dog.

Wait, there’s more. Sutculer then convinced a veteran’s organization to buy into this scam. In 2019, the Veterans & Youth Career Collaborative (VYCC) announced a “collaboration” with Sutculer’s clownhouse, saying:

The VYCC is run by retired USMC Captain Nelson Varas, whose name appears as the author of the announcement above. I’ve reached out to Varas to find out what level of due diligence he did on Sutculer, and why he didn’t realize he was getting into bed with a guy who sells fake MBA degrees over the internet. So far, Varas hasn’t responded to emails or calls on the issue.

I keep saying there’s more, but there’s more more. I’ve found that at least a handful of VYCC staffers or other related folks bought the fake project management certs from Sutculer. And keep in mind that VYCC runs a “Youth Academy” and claims to “serve as an independent nonprofit organization source for No-Cost Vocational Training and a Career Resource Center for our military veterans and youth community.”

As in kids. Of US veterans.

I’m very, very concerned that VYCC didn’t do any background checks on Sutculer before launching this program, and is helping them to victimize veterans and their families with fake professional credentials. I’m more worried this might not have been an accident, since VYCC sells project management training courses, suggesting VYCC knew very well what it was getting into. Or maybe there were so desperate to add another partnership to their roster, they never bothered to check.

What’s That, Lassie? Someone Got Robbed by the Old Mill?

I want to reiterate: under this scam, US veterans and their families are being victimized by foreign nationals selling fake products. It’s one thing for some overseas scammer to be operating on his own shores. It’s an entirely different box of cheese when they partner with US organizations to rip off US veterans.

In the US, Congress has been resistant to outlaw diploma mills, with lawmakers afraid that they might alienate some big political donor or find their own resumes suddenly get lighter. On the ISO front, both ISO and the IAF have likewise resisted working with governments to outlaw certificate mills, thinking the problem would just go away. Now we see organizations competing toe-to-toe with giants like BSI and PMI, as the problem has grown exponentially.

We can expect little support from the Swiss government, with has made a name for itself by becoming a haven for criminal and fraudsters. But by stepping into the US, Sutculer and Obergfell fall under US law, and that gives us something to bite into.

I’ll be filing complaints with the Federal Trade Commission, California anti-fraud regulators, the State AG, and anyone else I can think of, to get Sutculer’s operations shut down in the US. I’ve already filed a complaint with the US Dept. of Veterans Affairs (VA) Inspector General. Given they are bunkered in Switzerland, it’s a long shot.

If you’ve been ripped off by Sutculer or Obergfell, let me know, and we can add your information to the file. Your name will be kept in confidence, unless you say otherwise.

UPDATE 13 February 2022: The page on the VYCC website announcing the partnership with Sutculer is now down, and reporting a 404 error.   Despite calls and emails, VYCC’s Varas never responded, so it’s not clear if he removed the announcement because he severed the relationship with Sutculer, or if VYCC is simply hiding its involvement.  Varas does not seem to have confronted Sutculer, since the collaboration announcement is still up on the IO4PM website.

At the same time, Charles Hannabarger has demanded his name be removed from this article, calling it “slander.” To be clear, I am suggesting Hannabarger is a victim of this scam, not a participant. The point is that Sutculer has even tricked published authors and industry experts into buying diploma mill products from Turks living in Switzerland.