Alex Mendes is the main protagonist of THE AUDITOR and the Director of Quality Assurance for Mundrum Machining Corp.

Alex often appears drained and put upon during the audits by Ray Battlesbee, and sometimes has outbursts of anger. Away from Ray, and especially around his co-workers, Alex is more cheery, and always willing to help and support his team members. Dedicated to quality, Alex wants his department and the company as a whole to succeed, and continues to research new quality assurance approaches to help improve.

Alex is the “Management Representative” over the quality system, and so remains the main point of contact between Mundrum and auditors such as Ray.

Alex attempted to learn more about quality and the role of ISO 9001 auditors by attending the annual ISO 9000 World Conference in Orlando in 2019. There he met a number of ISO luminaries, including Tim Lee, Nigel Croft and Elva Nilsen. He was invited to join TAG 176, but has yet to attend one of their meetings.

Alex accidentally summoned ASQ Cultists after uttering the word “ASQ” three times; he then sought information on how to report bad ISO auditors, but ASQ had no means of helping him. He later accidentally summoned CQI Cultists. The experience left Alex disheartened about the state of the ISO certification scheme.

Alex is half Mexican and half Morroccan. He speaks fluent Spanish. He has a university degree, but it is not known in what subject.

Alex had “back surgery” in late 2020, a retconning to explain his change in appearance since the earlier strips. According to THE AUDITOR creator Christopher Paris, the strip was not planned to be a serious addition to the Oxebridge website content, and so the artwork was rushed. As a result, Alex originally appeared with one shoulder larger than the other, and with a significant “hump” when seen from the side. This was corrected when the character underwent design improvements around September of 2020. 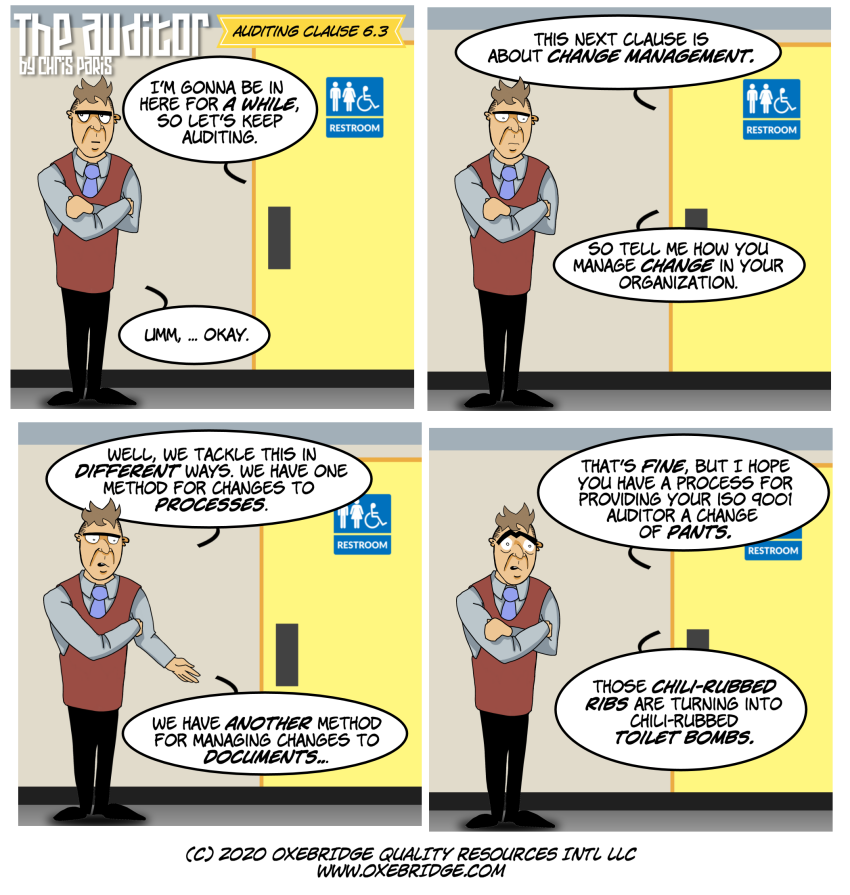