A2LA, a body issuing accreditation for calibration and test laboratories, may be in violation of its own accreditation rules with the formation of a sister organization that offers “customized consulting.”

In 2019, A2LA spun out its training offerings to a new not-for-profit organization called A2LA WorkPlace Training (“A2LA WPT”), but appears not to have done the due diligence to ensure the removal of conflicts of interest. A2LA is a signatory member of the International Laboratory Accreditation Cooperation (ILAC), which claims to ensure members comply with ISO 17011, the official rules for accreditation bodies. That standard prohibits an accreditation body from offering consulting, or from coordinating its accreditation activities with any consulting firm that does.

The conflict of interest is particularly troubling since the clients of A2LA are involved in critical activities such as the testing of aerospace and automotive components and medical devices, as well as the calibration of devices used in the manufacture of such products. Failures by these labs can lead to significant risks to public safety and human health. Such conflicts raise questions as to whether A2LA could truly be objective and independent when auditing clients of its A2LA WPT sister organization, or would they be likely to overlook lapses in order to keep A2LA’s “brand” unblemished among its clients.

To get around this, organizations sometimes create “sister” organizations under a separate business registration, but often sharing the same office space and staff. ISO 17011 addresses this, however, by limiting the activities of any “linked” bodies as well:

d) effective mechanisms to prevent any influence on the outcome of any accreditation activity.

The standard then goes on to demand separation in the marketing of the AB and any such linked companies:

The accreditation body’s activities shall not be presented as linked with consultancy or other services that pose an unacceptable risk to impartiality. Nothing shall be said or implied that would suggest that accreditation.

A2LA appears to violate multiple rules with the formation of A2LA WPT. The WPT organization provides consulting services specifically for ISO 17025 clients, which it then provides accreditation services for through A2LA. The WPT wing then makes no attempt to conceal that it sells its services back to A2LA clients. In a conversation with Oxebridge, A2LA WPT CEO Tim Osborne admitted that WPT accredits A2LA clients, while saying they consult for clients of A2LA’s competitors, such as ANAB  and Perry Johnson Laboratory Accreditation (PJLA).

A2LA WPT is a separate organization, but only barely. The two firms share the same floor in the same office building, with the A2LA office only across the hall from the A2LA WPT office. Osborne was, himself, the prior head of training services for A2LA before WPT was spun off. It is suspected they share many of the same office staff, making it likely that A2LA is paying a portion of payroll or other expenses associated with A2LA WPT.

As indicated above, ISO 17011 demands that any such “linked” organizations have “distinctly different names, logos and symbols.” In conflict with this requirement, the logos used by WPT and A2LA are identical. 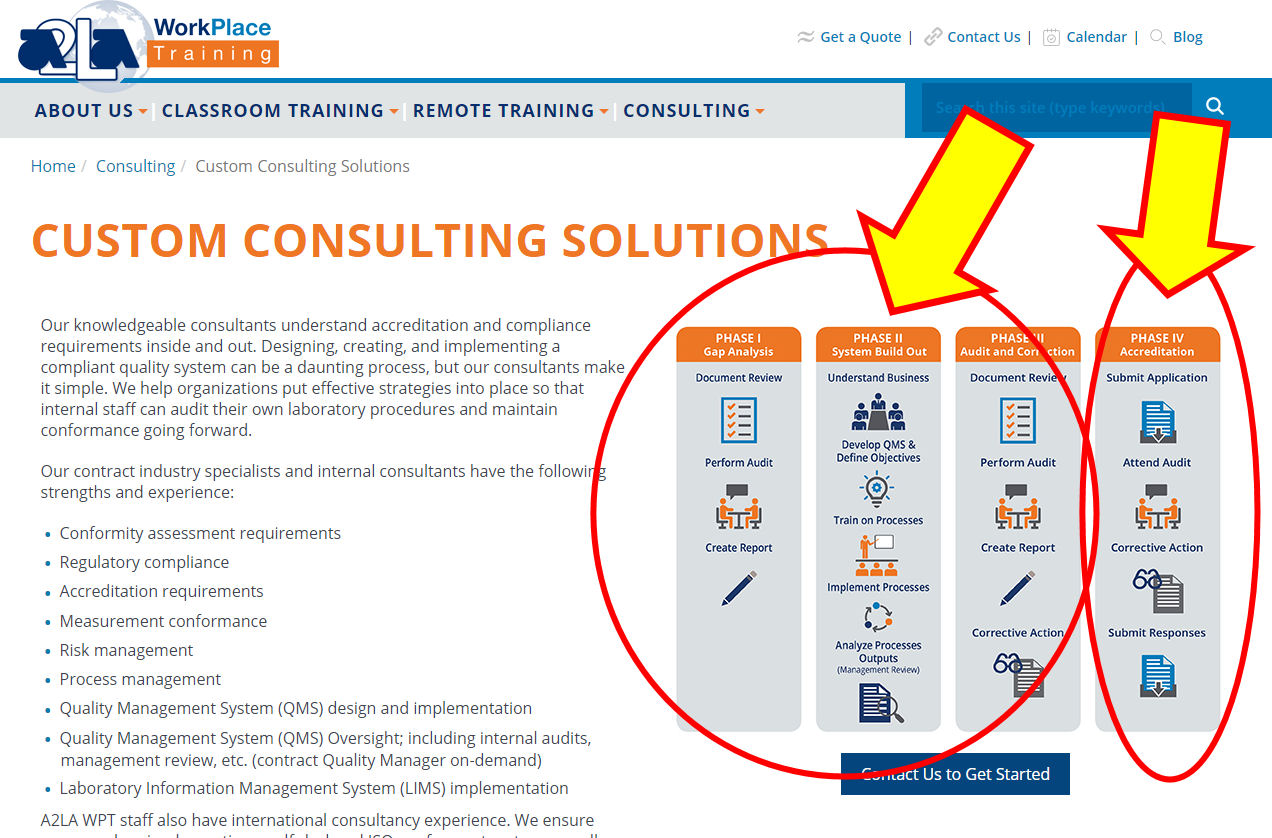 The A2LA website, meanwhile, then offers a link back to the page of A2LA WBT, apparently clearly violating the ISO 17011 rules against co-marketing. Neither A2LA site provides links to any competing accreditation bodies, such as ANAB or PJLA, showing a clear bias in its marketing.

Osborne accidentally conceded that there is a problem in the perception, saying,  “We don’t discriminate in the way many think we do.” He claims the company is working on updating its branding, but it may be too late since a2LA has been operating in the market for about a year under this combined marketing effort.

The A2LA WPT consulting offerings include various sets of template kits which A2LA WPT sells for as much as $4,995 US. The cheapest package costs $995 US. The pricing documentation received by Oxebridge includes the same four-phase graphic which includes the “Phase IV Accreditation” step, thus linking the two services further.

A2LA WPT may also face issues with US tax law. Osborne admitted the new company is organized as a 501(c)(3) not-for-profit “charity,” but the likely proper formation would be a 501(c)(6), which is used for industry trade organizations. As a 501(c)(3), WPT would have to prove to the IRS that it serves a “public need,” and does not exist solely to market its products. This problem was recently encountered by the American Society for Quality, when the IRS allegedly found its activities did not comply with 501(c)(3) rules, and it was allegedly “forced” to spin out certifications to a sister organization, ASQExcellence, as a 501(c)(6).

Overall, it appears that A2LA rushed the separation without proper oversight, consideration or legal review.

Worsening matters for A2LA WPT, it now claims to offer custom consulting for other standards, such as ISO 9001 and AS9100. This is likely to reduce any referrals given to A2LA by consulting firms, further impacting on their overall revenue. One ISO9001 consultant told Oxebridge, “I’m recommending ANAB, from now on. Why would I refer anybody to A2LA if there’s a chance they will steal them as an ISO 9001 client and cause me to lose money?”

Osborne insists the arrangement was fully vetted, and denied any violations of accreditation rules, saying, “It conforms to 17011. It has been evacuated by ILAC, APAC and IAAC.”

Oxebridge has written to multiple representatives of ILAC, as well as executives within A2LA. None have responded. A formal complaint is being prepared.

Because A2LA pays fees to ILAC, it is unlikely that ILAC will rule against it. While this outcome is expected, it would further dilute accreditation validity by officially ignoring violations of 17011. This, Oxebridge argues, further opens the door for wholly-unaccredited calibration and test lab certifications, issued outside of the ILAC scheme entirely. It also invites ILAC members to quit participation, since there appears to be no significant discriminator in the validity of ILAC or non-ILAC accreditations; members would thus be justified in questioning whether membership in ILAC is worthwhile.

Comparisons have been made to the Perry Johnson organizations, but are not accurate. Perry Johnson Consulting is a separate legal organization from Perry Johnson Laboratory Accreditation, and in that case they appear to have put a more robust firewall in place. The two have separate street addresses, and use entirely separate logos and accreditation marks. The various “PJ” websites make no mention of the other PJ organizations, nor do they link to each other the way that A2LA does. There is no obvious coordinated marketing between the companies.

Accreditation oversight bodies such as IAF and ILAC routinely overlook the enforcement of accreditation rules, since the accreditation bodies pay membership fees to them, creating even more conflicts of interest. The bodies then collude to dilute rules in standards such as ISO 17011. The 1998 version of ISO Guide 61, which later became ISO 17011, disallowed such arrangement with stronger language. This was diluted once in the 2004 version of ISO 17011, and then again int eh latest version published in 2017. Even with the diluted rules, however, A2LA appears to have run afoul of them.

ILAC is currently working with the IAF to form a new “universal” accreditation body, presumably which would combine the activities of both. The IAF has a long and documented history of ignoring accreditation abuses by its members, as well, prompting Oxebridge to perform an investigation into potential legal action against it.

Disclosure statement: Oxebridge provides ISO 17025 consulting, but does not recommend one accreditation body over another. The reporting on A2LA is consistent with Oxebridge’s 20-year mission to provide reporting on certification bodies, accreditation bodies and standards developers. Normally, Oxebridge does not report on competing consultancies, but the A2LA arrangement presents a special case that intersects with the need to report on accreditation-related conflicts of interest. The decision to run this article is not based on any perceived competition between A2LA WPT and Oxebridge in the consulting space.