(UPDATE: This complaint has been closed and marked as fully satisfied. See latest update here.)

Oxebridge has filed another official complaint based on information gleaned from its ISO Whistleblower Program. The latest report concerns the UKAS-accredited certification body ACM Ltd., which has its headquarters in the UK but also operates in the middle east. Oxebridge has obtain a proposal developed by the ISO 9001 consulting firm Quality Administration Consultancy (QAC) of Doha Qatar which included pricing for ACM certification as part of the consulting work, in violation of the accreditation rules appearing in ISO 17021-1.

The proposal appears also to have ignored IAF MD5 requirements for minimum audit duration, in that it appears to be offering both ISO 9001 implementation and certification in only “4-6 days,” although the proposal is poorly worded and this may not be the case. What is clear, however, is that QAC is formally selling its own services alongside those of ACM. The company’s website claims, “At QAC, its certification guaranteed.” 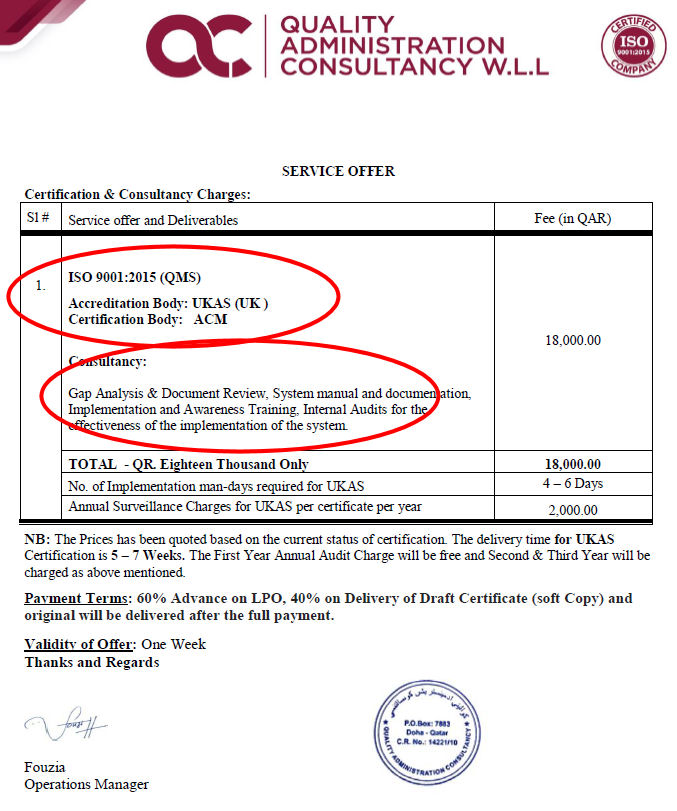 Proposal issued by QAC which includes ACM/UKAS certification alongside consulting. Note also the logo on the top right indicating QAC itself is ISO 9001 certified.

In its complaint, Oxebridge cited violations of ISO 17021-1 clauses 4.2 and 5.2, both which aim to limit conflicts of interest in the certification scheme. Those clauses prevent an accredited CB from co-marketing their services alongside any particular consultant.

Oxebridge recognizes that QAC may be using the ACM name without permission, but ACM would nevertheless still be held to ISO 17021-1 clause 8.5.3 which requires that, “the certification body shall exercise proper control of ownership and shall take action to deal with incorrect references to certification status or misleading use of certification documents, marks or audit reports.” ISO 17201-1 then indicates this could include legal action against the infringer.

The complaint was copied to UKAS, whose name and accreditation status was also used improperly by QAC. In multiple places within the proposal, QAC referenced “UKAS certification” or justified pricing by quoting UKAS. In reality, UKAS sets no rules on pricing, and does not offer certification.

The price quoted equates to less than $5,000 US for both consulting and certification by ACM. Accredited CBs in the Middle East region have been criticized for offering impossibly low-cost audits that allege to use underpaid Indian auditors, but which may also skirt rules for minimum audit days in order to win contracts.

QAC also appears to be claiming ISO 9001 certification for itself, with an ISO logo appearing on the proposal. Nowhere on the company’s website is there any evidence of QAC being certified.

Oxebridge reached out to QAC founder KM Hamzas on LinkedIn. Mr. Hamzas received the questions, but then did not respond.

The ISO Whistleblower program has resulted in dozens of validated concerns within only the past three months, with the bulk of those related to CBs operating in the India and the Middle East. It is not yet clear if this is because standards users in that region are suffering more violations of accreditation rules, or are simply more likely to report them than their counterparts in Europe and the Americas. Currently the program’s page is only offered in English, which may also limit the regions that utilize the reporting tool.

ACM has acknowledged receipt of the complaint and is processing it.

UPDATE 11 October 2019: ACM has processed the complaint and investigated the claims made by the consultancy QAS. The claims were made without any knowledge of ACM, and QAS was not an authorized representative of ACM. We will have additional reporting on this shortly. Oxebridge is closing the complaint as “fully satisfied” at this time.

See a new article on these developments here.