Paul Simpson has resigned his role as Chair of ISO TC 176 Subcommittee 2 (“SC2”), the body responsible for authoring the ISO 9001 standard. The move comes as Simpson faced formal complaints for his behavior on social media, and allegations that he violated ISO’s rules for conduct by committee representatives.

In an exit posting on LinkedIn, Simpson only attributed the departure to “personal” reasons, and gave no other explanation. Behind the scenes, however, Simpson was under fire from multiple individuals both within the ISO ecosystem and from members of the public, due to his often abusive treatment of those critical of ISO 9001.

Just days before his resignation, Simpson was banned from the ISO 9001 LinkedIn Group, which has over 150,000 members. That group is managed by Oxebridge founder Christopher Paris, who was a frequent target of Simpson’s ire. The ban came as it was learned that Simpson was reporting posts that were critical of ISO 9001 or his views, claiming they violated the LinkedIn terms of service. The practice of repeatedly reporting valid posts as TOS violations — known as “spam-flagging” — has grown to be a problem on social media, and is a common tactic for internet trolls.

Oxebridge had been preparing a large formal complaint against Simpson, showing alleged violations by Simpson of ISO’s official policies regarding committee chair behavior. Those rules prohibit ISO committee members from presenting their views as official ISO positions, from revealing details of ISO meetings, and from attacking critics. Oxebridge was prepared to allege that Simpson had crossed these lines multiple times over the entirety of his tenure as SC2 Chair.

A few days prior to his resignation, Simpson argued with quality assurance professional Al Smith over the topic of “documented information.” During that exchange, Simpson claimed he could not be expected to “justify work that was done leading up to a document that was published over 10 years ago.” 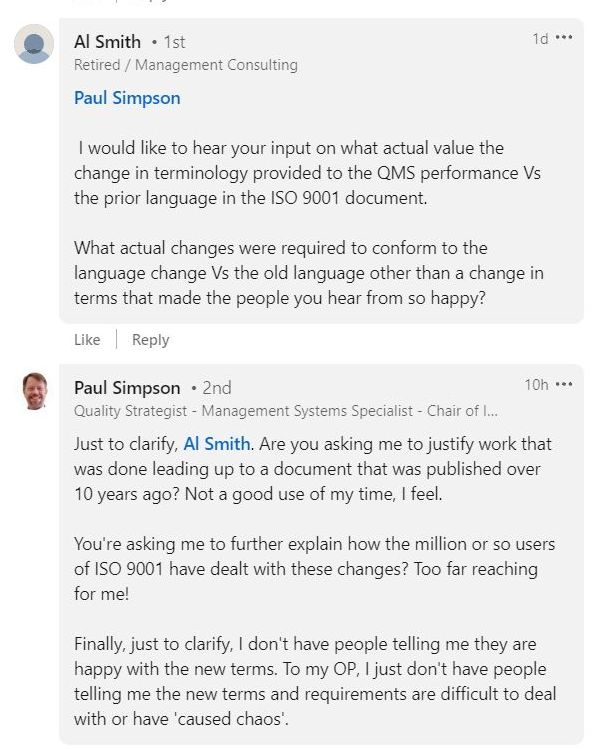 Simpson has claimed to be an expert on the standard, and often gave the impression he had some role in the 2015 version’s development. Simpson has written at least one book on ISO 9001:2015, and participated in many seminars and public engagements.

Simpson aggressively defended TC 176 for having ignored as many as five international votes in which the world rejected ISO’s plan to update ISO 9001. Simpson claimed that another vote would eventually be held to resolve the matter, and falsely claimed that work had not yet begun on the new version. In fact, significant work on the revision by SC2 had been underway for over a year.

Simpson took the role of SC2 chair in 2018, taking over for Nigel Croft, the architect of “risk-based thinking.” Croft appeared taken aback by Simpson’s sudden departure, posting on LinkedIn that he was surprised by the move.

The SC2 Chair slot will be temporarily filled by a BSI staffer, as BSI holds the secretariat position over TC 176.