Oxebridge has filed an official police report with Singaporean police against the ISO 9001 certification body Guardian Independent Certification (GIC), after it defamed Oxebridge in an official complaint response. Whereas defamation is a civil matter in the United States, it is a violation of the criminal penal code in Singapore, and can lead to arrest.

GIC’s certification manager Sim Bee Tan responded by rejecting the complaint outright, in a bizarre response that appears to have admitted to more violations of accreditation rules, rather than explaining how they were compliant with them.

Copies of three official GIC audit schedules were submitted with the complaint, none of which indicated sufficient audit days per IAF Mandatory Document MD5. The evidence also showed at least once GIC auditor simultaneously using contact information identical to that of Atlas Inspection Services, an ISO consultancy. ISO 17021-1 rules prohibit accredited registrars from colluding with consultants.

In all three cases, GIC did not appear to have any records of the audits, but instead relied on records maintained by the client. ISO 17021-1 requires the certification body — not the client — to maintain official records of audits that it conducts. Nevertheless, Tan indicated she had spoken with the clients to confirm the audits conducted were actually longer than the times indicated on the various official audit plans. As a result, Tam inadvertently admitted that GIC did not have accurate audit records of its own, another violation of accreditation rules. 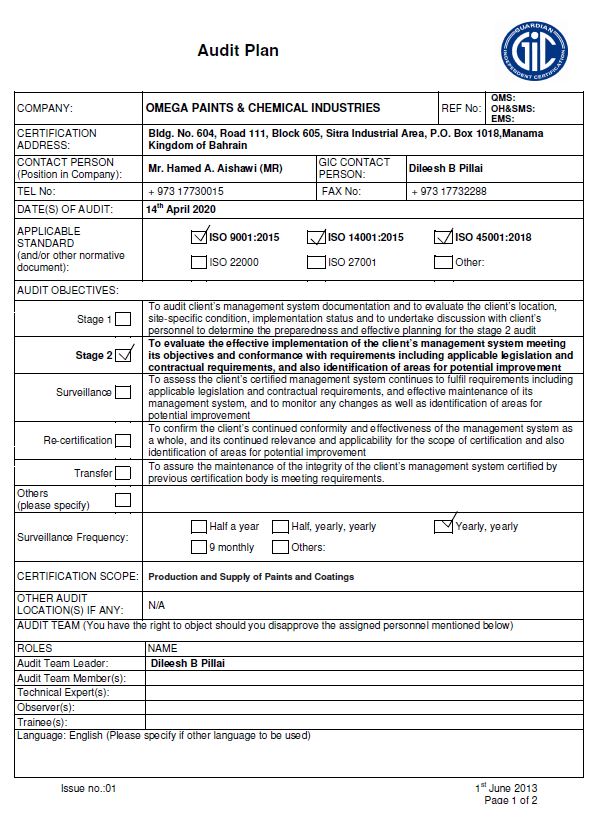 One of the schedules showed GIC had conducted a Stage 2 audit schedule for Omega Paints & Chemical Industries for three simultaneous standards: ISO 9001, ISO 14001 and ISO 45001. The second page of that plan shows the audit was conducted on April 14, 2020, by GIC auditor Dilesh Pillai, the same auditor connected with Atlas Inspection Services. Only one day, comprised of only six hours, was used for the triple certification audit. IAF rules would have required many more days for such an audit.

GIC’s Tan, however, claimed the audit plan was not an official GIC document, and that no audit had actually occurred. To make this argument, Tan instead worsened GIC’s violations by claiming the audit plan was a “sample” provided by Atlas Inspection. Tan wrote:

As for ‘Omega Paints & Chemical Industries’, our record shows that its certificate expires on 15th of February 2020. It is a withdrawn client and no record of audit conducted on 14th of April 2020. Omega wrote to us and explained that a meeting was held on 14th of April 2020 with their consultant and a sample audit plan was given by Altas Inspection to them to explain the audit requirements for the purpose of preparing them for certification audit planned to be conducted in May 2020. Hence Omega is a withdrawn client. Our record shows that Omega has applied for initial assessment and is pending for audit to be conducted. Our record did not show Mr. Dileesh conducted any audit on the Omega on 14th of April 2020.

GIC’s response is problematic for two reasons. First, it again relies on records of audit duration provided by the client, instead of GIC’s own records. More troubling, however, Tam’s denial simultaneously admits that GIC is allowing a third-party consulting firm, Atlas Inspection, to circulate “sample” audit plans — complete with dates of completion and the GIC logo — on its behalf. This also violates ISO 17021-1. 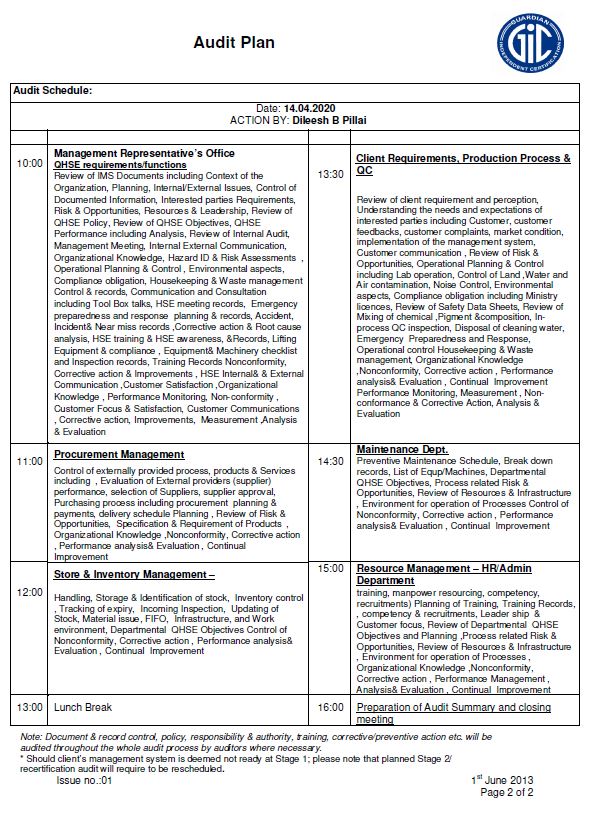 Tan then dismissed the Oxebridge reporting, and suggested GIC would take legal action, even as she violated Singaporean defamation law. Tan sent the complainant a link from a press release published by the self-accredited certificate mill Guberman PMC LLC, operated by Daryl Guberman and Don LaBelle, which falsely accuses Oxebridge of fraud, Communism, and other crimes. That post, along with others, was the subject of a US Federal lawsuit against Guberman and LaBelle, which resulted in the court awarding $1.6 million to Oxebridge in “compensatory damages.”

GIC either did not research the source of the defamatory link, or ignored the fact that Oxebridge had already prevailed in the resulting lawsuit. Nevertheless, Tan wrote that the link — the text of which accused Oxebridge of fraud — “is self-explanatory.”

Internet defamation is a crime in Singapore, under Penal Code Section 499. Typically, falsely accusing someone of a crime is treated as the worst form of such defamation.

Oxebridge has since reported the incident to Singaporean Police, and is working with investigators to see what actions can be taken against Tam and GIC.

At the same time, both UKAS and JAS-ANZ have been alerted, along with the IAF and its regional body APAC. So far, none have commented or taken action on the GIC scandal, despite the evidence submitted. A formal escalation to either UKAS or JAS-ANZ — or both bodies — will probably be necessary.

The various accreditation scheme actors are responsible and, in some cases required under law, to enforce the various ISO accreditation schemes, in order to ensure such certificates are issued under trusted, valid circumstances. Historically, the IAF and its bodies have instead refused to uphold the accreditation rules, as often their sole source of revenue comes from payments made by the registrars themselves. In at least two cases, the IAF has refused to act even when evidence appeared to show that laws were broken by ISO certification bodies.

Rather than formally process complaints as required by accreditation rules, CBs often resort to harassment, threats and defamation in order to escape scrutiny. Such behavior is then tolerated by the IAF and other oversight bodies, allowing the practice to go unpunished.

Oxebridge has reached out to GIC’s General Manager, Manineth Pulido, to resolve the issue, but Pulido has so far avoided responding.