Joyson Safety Systems Japan has revealed that it falsified seat belt strength data for decades, with some of that fraud occurring as late as 2020. Despite this, JSSJ continues to hold ISO 9001 certification from the Japanese Quality Assurance (JQA), an official certification body accredited under the IAF network.

Joyson and its parent company, Ningbo Joyson Electronic, purchased Takata after that firm went bankrupt for problems related to its airbag systems, which resulted in the world’s largest automobile part recall in history. A statement issued in 2020 by Joyson claimed the latest seatbelt issues “arose long before the acquisition of the plant from Takata in April 2018,” but subsequent investigations reveal the falsification continued well into 2020, under the Joyson management.

The problems primarily occurred at Joyson’s factory in Hikone, in the Shiga prefecture. 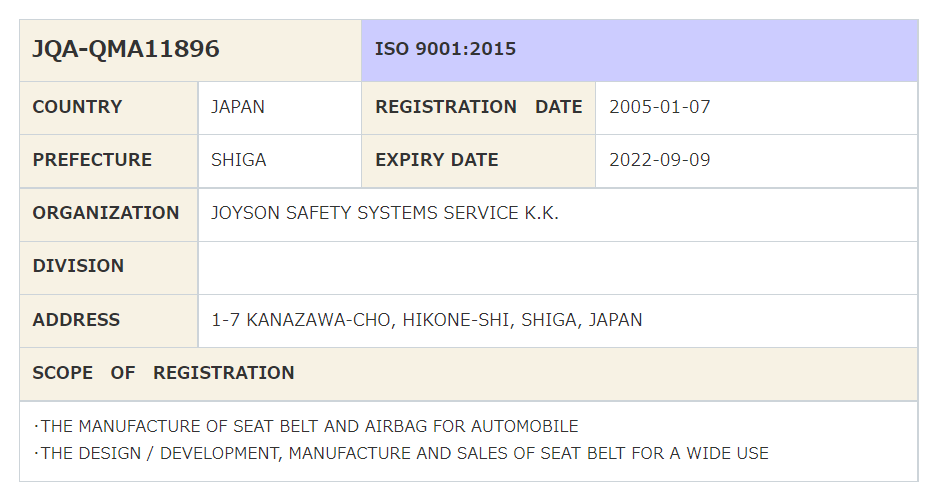 Records published by the Japanese certification body JQA show that Joyson’s Hikone plant has held ISO 9001 certification consistently throughout the scandal, dating as far back as 2005. At no time did JQA withdraw the certification from either Takata nor Joyson.

During its airbag scandal, Takata held ISO 9001 certification by Entela, which was later purchased by Intertek.

JQA, and its accreditation body JAB (Japanese Accreditation Board), have been found to be at the heart of the massive flood of data falsification scandals related to that country’s product quality. ISO certifications were held by the companies involved in all of the following scandals:

JAB is a member of the International Accreditation Forum, which has refused to take action. The IAF regional body APAC has also refused to investigate and continues to support both JAB and JQA.

In a May 2021 report by Bloomberg, the issue of automotive industry certification to IATF 16949 was also identified:

[JSSJ] became aware of the faulty inspection data at the Hikone factory in April, with certain data also appearing to have been manipulated to pass product safety requirements imposed by the International Automotive Task Force, a Europe-based certification body, said the people, who asked not to be identified because the information isn’t public. It’s unclear when the alleged data falsification took place, the people said.

IAF accredited quality certifications have been found to be involved in a huge array of global disasters and scandals, including the Deepwater Horizon oil rig disaster, the Grenfell Tower fire, the Takata airbag defects, the PIP breast implant recalls, the massive Equifax consumer data hack, the California wildfires, and more. Thousands of people worldwide have died under these incidents, but the IAF — which is registered in Delaware but managed by China — remains wholly free of government oversight.

Oxebridge is pressing to have the IAF called to a hearing by Congress, to answer questions on why it has refused to take action against the certification bodies who continue to grant ISO certificates after such incidents.