It’s probably not a shocking headline but back in 2014, Boeing’s Tim Lee, he of the IAQG’s Registration Management Committee (RMC), just “went there” and referred to unaccredited AS9100 certificates as “bogus,” “fake” and “counterfeit.” Maybe that’s not a shocker, but these are words that most people are very, very careful to avoid since they come with quite a lot of loaded legal implications that are not actually supported by, you know, the law. Unfettered by an actual knowledge of the law or even a sense of due diligence, Lee not only splattered these words irresponsibly on a PowerPoint presentation, he then stood up in front of at least one very, very public conference and made the potentially defamatory claims out loud.

This is not to defend the unaccredited, or self-accredited certificate mills out there. After all, I coined the nickname “The Indefensibles” for them, and am leading the industry charge to make their activities a crime. I daresay I have done a heck of a lot more on this cause than Lee has.

But, damn! Did no one at IAQG or AAQG vet his presentation? You can’t just accuse someone of a crime without proof! 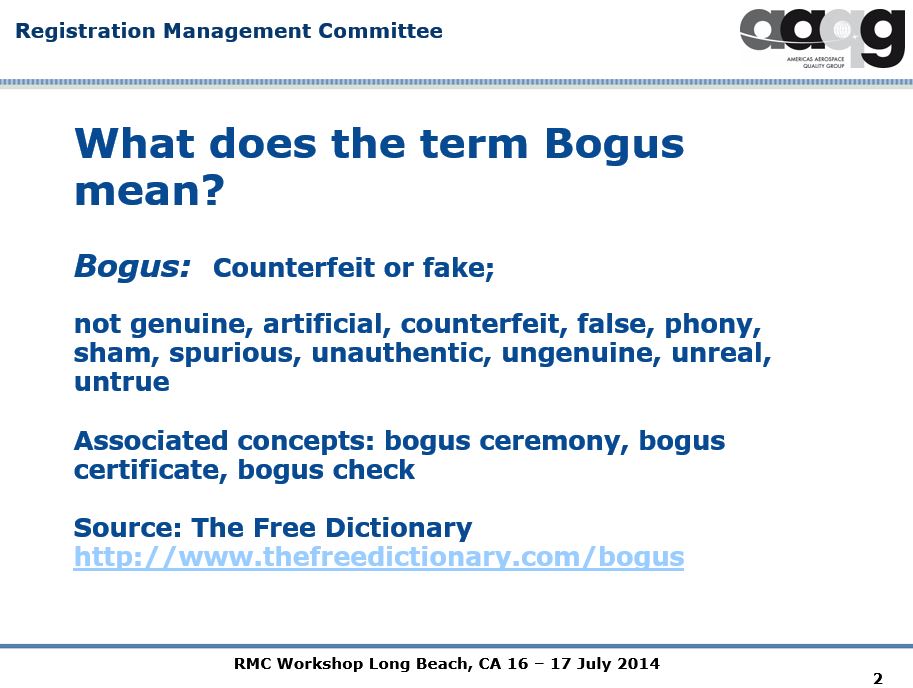 The presentation was (presumably) hosted by DNV’s go-to Long Beach guy Sidney Vianna, who later posted the slide on the Elsmar site, where he likes to post lots of stuff from other people without permission. Lee’s presentation then goes on to provide an example of an “accredited certificate” which, of course, features the DNV logo on it. Backscratchy, no? 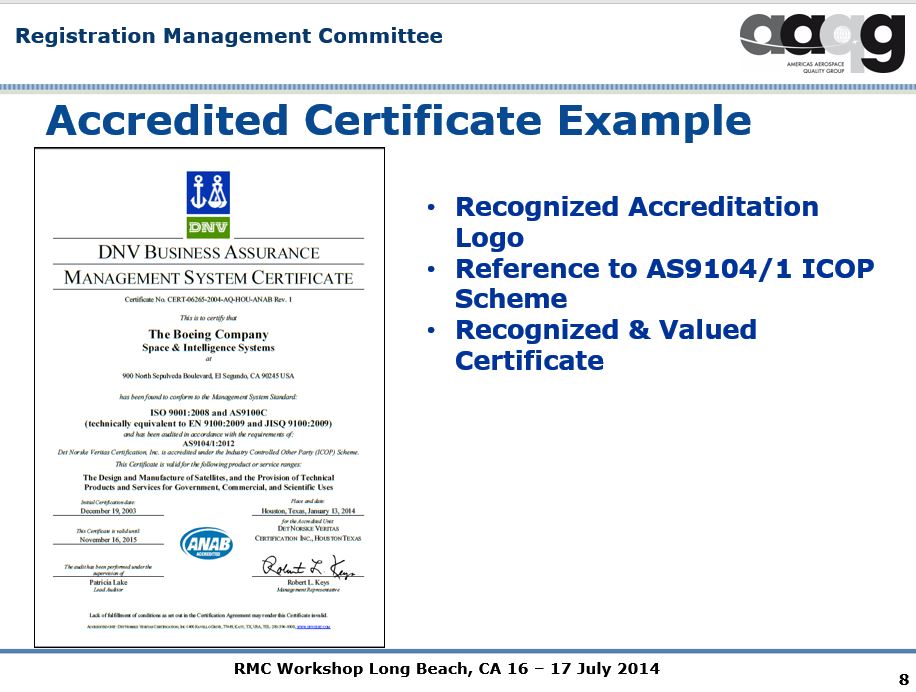 Lee — who was previously a lowly receiving inspector at Boeing before he landed this sweet standards gig — then goes on to throw poor former certificate mill operator Del Straight under the bus by publishing one of that guy’s unaccredited AS9100 certs right in his slide presentation, ensuring Straight’s ongoing infamy in the industry:

Not content to essentially refer to Straight — who, I suppose, is only identifiable by his company logo — a “fake,” Lee then makes the bold and totally-impossible-to-prove-in-court claim that his cert has “no value.” Ouch.

Now, as I said, no one is fighting the certificate mills more than me, and Lee’s clumsy attempt is weak at best. But it’s also utterly incompetent since it exposes himself, Boeing, DNV and AAQG to a lawsuit by Straight and other non-IAQG certificate mills.

There is no law that requires accreditation, you see. Until Lee gets off his ass and gets the laws changed — he can join me on that quest, if he can manage to pick up the damn phone — then he doesn’t get to tell people what is “fake” or “counterfeit” or of “no value.” Heck, his ridiculous PEAR form has no value, but you don’t see me calling it “counterfeit.”

Without a law on their side, IAQG and AAQG and Boeing and DNV don’t get to call their competitors “fakes,” “unreal,” “untrue” or “counterfeit.” Ironically, Lee violated defamation laws by being so overcaffeinated and underinformed in his presentation. Now it’s Lee that can be sued!

Lee gets one point right, though: he claimed “unaccredited conformance bodies often make false promises,” and then listed a few, including the false claim that they are “industry recognized.” Ironically, certificate mill operator Daryl Guberman is making the claim right now that Lee’s own Boeing (along with Lockheed) recognize his self-accredited certificates:

Will they sue Guberman? Of course not. Instead, they will keep their huffin-and-puffin to events surrounded by “friendlies,” like that Long Beach crowd, and make sure guys like me aren’t allowed in to ask the uncomfortable questions. But Boeing or IAQG could take actual steps, right now, to help put the mills out of business if they really wanted to; they’d just have to spend money to do it. Powerpoint presentations are free; lawyers are not.

But Lee’s next sentence is critical and wholly true:

Suppliers could waste thousands of dollars and value time to obtain an unaccredited certificate only to learn that it is not acceptable to their customer.

In the meantime, I’ll keep doing the heavy lifting of trying to work with Federal regulators and legislators to have the certificate mills deemed a threat to society and public safety, and to put them in jail. This is because having self-accredited certificate mills issuing conflicted certificates for things like airplane parts and medical devices and automotive brake lines is dangerous, and will result in real people getting killed. But until that happens, though, you really can’t call a certificate mill cert “fake” or “bogus” or “counterfeit.”

When Tim Lee wants to get serious about fighting the certificate mills, he can contact me. I could get a lot more done with Boeing helping me, rather than fighting to try and keep me out of their meetings. We’re supposed to be on the same side here.