A company at the heart of a criminal trial for forging aerospace source inspection records held AS9100 certification issued by NSF-ISR at the time the crimes were committed. According to the FBI, an employee with PMI Industries of Rochester NY intentionally falsified dozens of source inspection records for aerospace parts later sold to SpaceX, in order to “ship more product.” The employee, James Smalley, is facing 10 years in prison for the crime.

The source inspection falsifications occurred in 2017, when Smalley allegedly used his laptop to insert scanned signatures of inspectors from another firm, SQA Services, to certify that SpaceX parts had passed critical inspections, including NDT tests. In some cases, the parts had not undergone the inspections or tests at all. The scam was uncovered when SpaceX commissioned SQA to do an internal audit in January 2018, and they uncovered Smalley’s forgeries. SpaceX, PMI and NASA were all immediately notified.

PMI closed entirely as a result of the scandal, and 30 New York employees lost their jobs.

PMI held AS9100 certification at the time, however, issued by NSF-ISR and accredited by ANAB. According to official IAQG OASIS records, PMI’s certification lapsed in September 2018, some nine months after the SQA audit revealed the forgeries. OASIS indicates the certificate was withdrawn because PMI failed to update to AS9100 Revision D in time, when in fact it was because the company was forced out of business.

The standard industry answer for why AS9100 registrars fail to uncover such issues is that auditors are not trained nor tasked with rooting out fraud. This appears to be debunked, however, since the problem was found by SQA’s auditors. Furthermore, source inspection records are easily checked to see if signatures are originals and not electronic images pasted into a document. 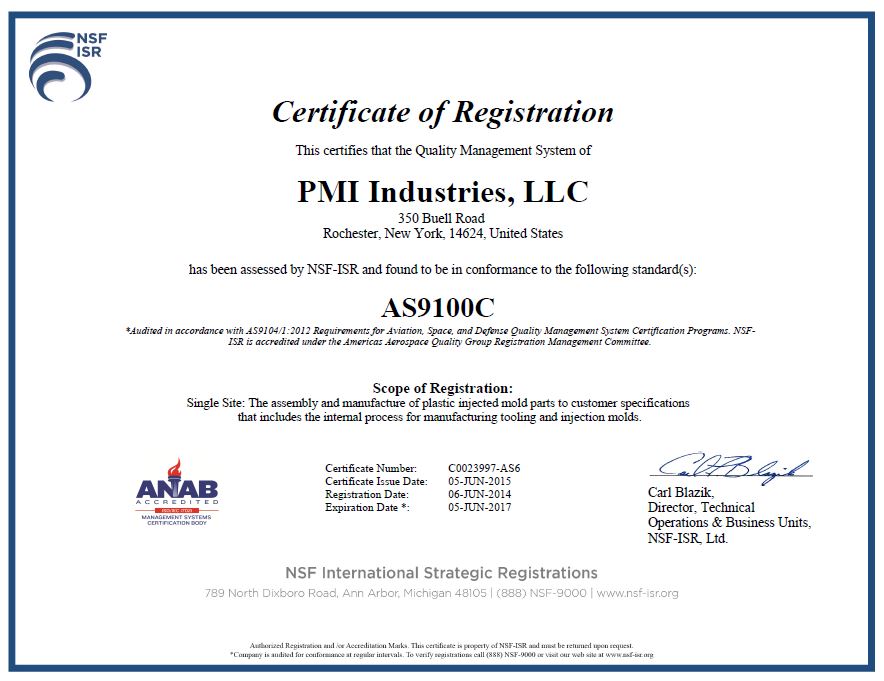 AS9100 certificate issued by NSF-ISR to PMI (click to enlarge)

NSF faces criticism for its auditing of SpaceX itself, after the US Dept. of Defense Inspector General’s office conducted an AS9100 audit of SpaceX in 2017 and found dozens of major nonconformities which had gone undetected by NSF. NSF upheld SpaceX’s AS9100 certification even after the DOD report was made public.

NSF also issued the ISO 9001 cert to L3 EOTech, which was found to have intentionally shipped defective gun sights to military and police personnel.

California-based Kirkhill Esterline was found to have engaged in criminal violations of the ITAR regulations while holding an AS9100 certificate issued by NSF. The company maintained its AS9100 certification even after the ITAR violations were reported by the US Dept. of State.

All of the NSF certificates were accredited by ANAB, which is tasked with ensuring the validity and trust of accredited ISO 9001 and AS9100 certificates. ANAB has remained silent on how its logo consistently appears on certificates issued to companies during and/or after major scandals are reported to the public.

Oxebridge is calling on greater government oversight of the accredited certification scheme, alleging that organizations such as ANAB have abdicated their responsibility in protecting the validity of such certifications, putting public safety at risk and causing billions of dollars in waste and losses for taxpayers.

[Disclosure: Oxebridge worked on the SpaceX QMS between 2005 and 2014; it has had no role in the company nor its quality system since that time.]