Scott Paton Leaves Exemplar to Form Competitor, Throws Shade on the Way Out 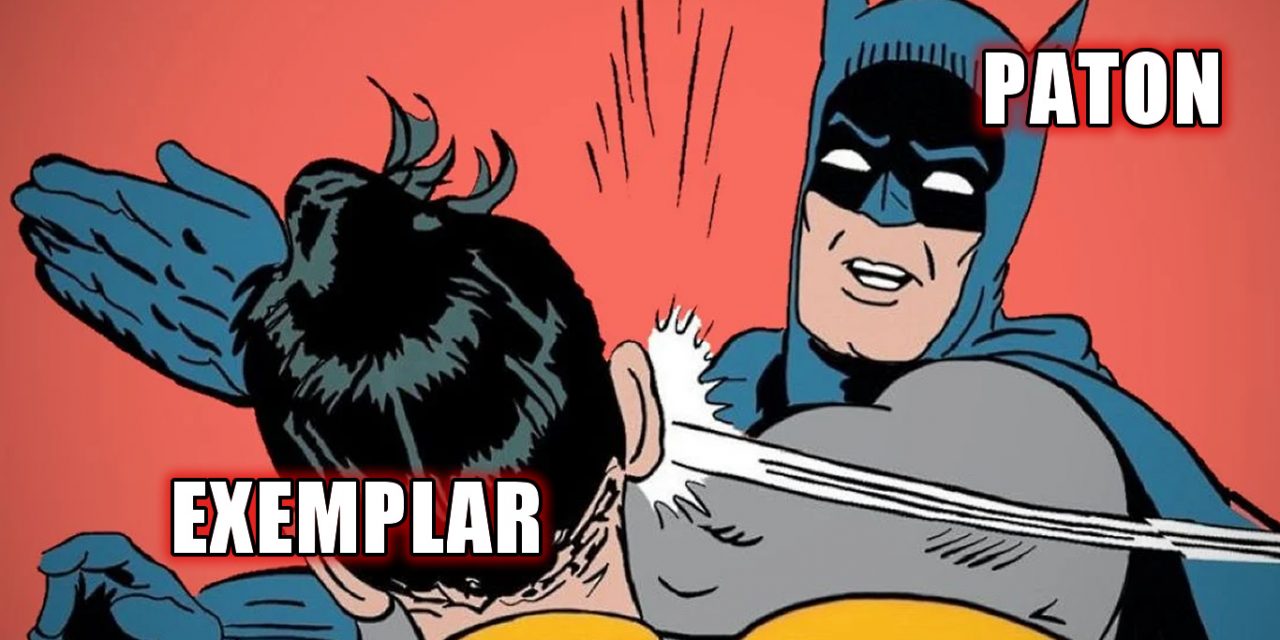 Scott Paton is like an old sofa you can’t find time to get rid of. You move it around, from the attic to the basement, but it’s always there. Just shifting location and stinking up the joint.

Paton has worked at his own publishing company, Paton Press, as well as that of Quality Digest. Back then he wasn’t against throwing shit against his competition in the publishing field, namely ASQ, by accusing them of ethics lapses for fibbing about their circulation numbers. Paton had nothing to say about that uncomfortable time Quality Digest hired an attorney to defend its right to hire racists.

But now he’s quit that, too, and gone on to form Certus Professional Certification, a new competitor eo Exemplar. When asked about it, Paton made it very, very clear he thinks the company he used to run is a shitshow: 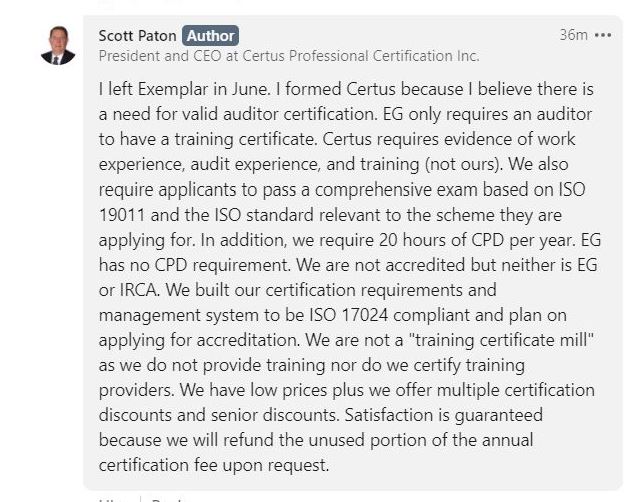 (It’s worth pointing out that he immediately deleted his own posts, apparently knowing he stepped in it.)

I raised the point that Certus is a certificate mill, accredited by no one, and then issues certificates with “guaranteed satisfaction.” The best defense Paton could come up with is that “we are not accredited but neither is EG or IRCA.”

That’s because they are all certificate mills! These “auditor certifications” are one of the most overt scams running in the ISO certification scheme.

Paton’s Certus offering, however, looks far, far worse. Take a look at this screenshot from the Certus website:

So Certus offers auditor certification, but you don’t have to take certified training to get certified. Make sense?

The argument Paton appears to be making is that it’s unethical for companies like IRCA or Exemplar to sell students courses and then certify them to the courses afterward. The only problem here is that is exactly how the world’s educational institutions work. You pay Harvard or Columbia a fee for their courses, they give you a test, and if you pass you get a certificate, which they call a “diploma.” To ensure this isn’t rigged, those schools are then accredited.

So while they refuse to get accredited, at least IRCA and Exemplar are somewhat close to the university model. Certifying someone after they take your course is not, on its own, unethical.

Paton instead decides that to battle this perceived ethical lapse, he should go further into the mud, rather than get out of it completely. Paton is aping those offshore, unaccredited fake universities that offer educational degrees based on “life experience” instead of actual education. Here’s what the site CollegeRanker has to say about such schools (emphasis added):

The biggest indicator that a college is a scam is if you can earn an entire degree through life experience. Any “college” offering this is a company using psychological sales tactics to make a profit. These companies know how valuable a college degree has become in the marketplace. They see the amount of people with years of work experience going back to school online. They also see that these people are motivated by the current climate of job insecurity and have devised a scheme to prey on these insecurities. People in sales and marketing know that people love to feel valued for what they know, and they love a product or service that helps them cut corners without compromising their values. These companies have taken this market research and used it to create degree mills.

Here’s what the US Federal Trade Commission has to say about “life experience” universities:

A “diploma mill” is a company that offers “degrees” for a flat fee in a short amount of time and requires little to no course work. Degrees awarded through diploma mills are not legitimate, and can cost you more than just your money.

Instead of taking an IRCA or Exemplar Lead Auditor course, Paton will give you a cert based on your resume and a quiz on ISO 19011, one of the most inconsequential standards ISO has to offer. And since it’s “guaranteed,” I suppose we can assume the pass rate is a totally-not-curious-at-all 100%. Heck, maybe 110%. (See update below.)

He’s also being totally disingenuous.  Paton will accept your Exemplar card to get you enrolled for free in Certus for the first year (a violation of ISO 17024, by the way), but afterward, he suggests Exemplar’s courses are not recognized by him as “valid,” and he trusts life experience more. So he’ll recognize Exemplar only to the extent that he can steal their clients.

Is this even legal? If I were Exemplar, I’d be talking to lawyers.

Oh, and he’s cut a deal with an insurance broker to get you discounted professional liability insurance, because having an alternate revenue stream is probably a good idea if you’re selling “life experience” certificates. (What he should have done is partnered with a medical insurer and offered low-cost supplemental health insurance, since most auditors can’t afford doctors after spending money on stupid certifications.)

Paton says he’s pursuing full ISO 17024 accreditation. But lots of mills say that and they never do it. But he can’t get it anyway. Paton’s offer to accept another body’s certificate as a fast-track entry into his own is, as I said, a violation of ISO 17024. Ironically, complaints filed against Exemplar’s original company, RABQSA, were on this very subject, and led to a black eye for that company’s prior CEO, Mike Carmody. So, because of this conflict of interest, Certus would fail any accreditation audit if he signed up for one.

But the clock is ticking.

It’s the last thing the ISO scheme needed: another dubious, unaccredited training “certification” created by a publishing company, rather than an actual engineering or quality assurance firm. This will have the effect Paton wants: chewing into his former employer’s profits apparently out of sheer spite, but not much else.

But following the model of “life experience” diploma mills is a whole new kind of low.

This will further dumb down the already incompetent auditor pool, and thus increase the risk of wholly non-compliant companies obtaining ISO 9001 certification. With certs in hand, those unqualified companies then land lucrative contracts for medical devices, automobile manufacturing, or airplane construction. Then, products will fall out of the sky because the quality systems are rubber-stamp garbage.

Qualified, well-trained and competent auditors are the first line of defense against deadly product accidents, recalls, and death by defective products. Dumbing down auditors will result in tremendous harm to the planet, and will drain already-poor auditors of more of their cash.

Can we get someone to throw out this sofa already?

UPDATE 18 November 2020. Scott Paton has replied on LinkedIn claiming the article is “filled with inaccuracies,” but then inserted more — not less — uncertainty in just how Certus operates.

First, I didn’t say that Certus only accepts life experience, and indicated that there was an exam in ISO 19011, as he said previously. now, however, Paton adds a new requirement that he hadn’t mentioned earlier, saying that there is another exam given for the particular standard as well. That’s new information.

It’s also not indicated anywhere on the company’s website, which was (conveniently) down right when Paton was posting. I found a cached version, and the site says nothing about an exam, but instead includes this damning statement:

We have rigorous requirements, but a simple process. Just pay your fees, upload your documents, and you’re good to go!

The same claim is made multiple times on Certus’ Facebook page, too. However, one post there does indicate there is an “exam,” so I decided to double-check. Certus issued one certificate to Chilean ISO standards authority Jorge Bravo, so I wrote to Bravo. He wrote back indicating that he did take an exam for each of the three certificates he was given by Certus. He also had to submit an audit log, CV and evidence of a prior certification from another body (presumably Exemplar):

Bravo also confirmed he took a test on ISO 19011. So, fair enough. I suspect Paton is scrambling to update the website so his claims are supported after the fact, but we will see. (It’s still down as I write this.)

But the Facebook page proved a trove of more potential conflicts of interest. There, Paton posted the various people who have received Certus certifications already, and they show a stunning similarity. These include Denise Robitaille and Shauna Wilson, both of whom worked for Paton at his company Paton Professional. It includes Bravo alongside Elisabeth Thaller, both of whom worked for Paton when he headed up Exemplar. This also includes Craig Cochrane, whose book on ISO 9001 was published by Paton Press.

Worse, all of these certificates were issued in roughly a one-week period in October and November, making it seem like Paton — in an attempt to show that someone was actually using his service — handed out a few certs to former colleagues and friends.

The other problem with Paton’s answer is that he is making some distinction that “work experience, audit experience and training” are not the things that “life experience” universities use when issuing their degrees. One such school defines “life experience” as:

So, again, it’s not confidence-inspiring that Paton ran to shouting “fake news!” and then is applying some weird wordsmithing to dodge accountability here.

UPDATE 24 April 2021: The Certus website has been updated, and there are three interesting developments.

First is the “Board of Directors” which conveniently includes those very same people to who Scott Paton granted initial certifications, including Denise Robitaille, Jorge Bravo, and Elisabeth Taller. That’s wholly unethical — Certus should not be certifying its own people.  The Directors list also includes Paul Palmes, who famously lied about his ISO experience while campaigning for the TC 176 Chair position, Palmes was found to have padded his resume by adding over 20 years of experience he didn’t actually have. IF Palmes represents the caliber of qualified people Certus will accept, then presumably you can just lie on your resume and get a Certus certificate.

That list also includes Jeanette Preston, who famously ignored all ethical concerns to collude with ANAB and a private consultant to create the doomed “SN9001” certification program for snowplow operators. Preston helped spread the false claim that her SN9001 program would result in a reduction of insurance premiums, something that actual insurance companies denied. She’s also got her name connected to the unethical “nonconformity quota” scandal circulating through the AS9100 scheme. 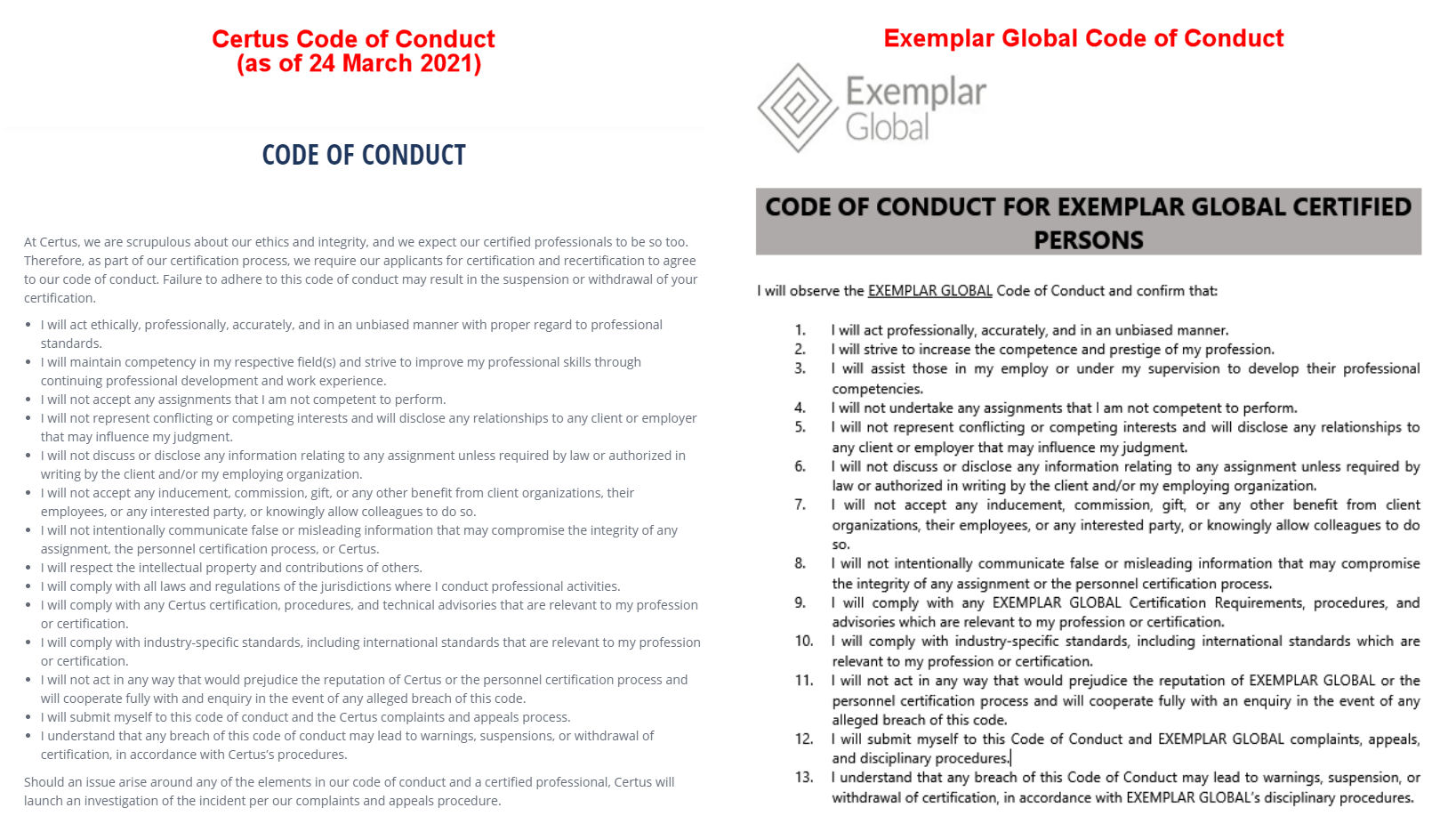 Comparison of Certus vs. Exemplar “Code of Conduct.” Click to enlarge

The final development is that now Paton requires Certus folks to show proof of having attended someone else’s 36-hour Lead Auditor course. The website has definitely being more cautious about putting the “life experience” stuff upfront — although it’s clear this is still a resume-based program — and now requires you to get trained by someone else.

I am not sure I understand the logic of paying IRCA or Exemplar for a course and then spending more money to have Certus issue the certificate. I assume that the comparison between Certus and those fake “life experience degree” schools pissed Paton off, so he’s trying to cover his tracks.