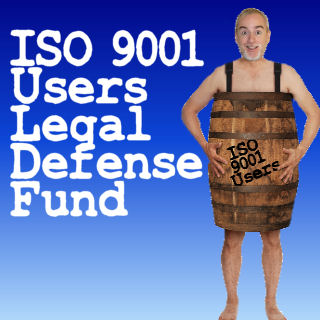 Oxebridge has launched an ISO 9001 Users Legal Defense Fund to help push forward on class action lawsuits intended to improve the ISO 9001 scheme, as well as to help defend against frivolous lawsuits and litigation threats issued by ISO 9001 certification bodies and standards developers.

Since 2005, Oxebridge has been the recipient of twenty different litigation threats; of those, only two ever made it to court, and both were won by Oxebridge. The rest were defeated prior to any litigation. The cases include two attempts by ISO/ANSI to invoke copyright as an attempt to squelch discussion on their standards, and seven from certification bodies seeking to stop Oxebridge from filing complaints on behalf of clients and industry stakeholders.

Even when the cases do not make it to court, Oxebridge absorbs legal costs to fight the cases through aggressive responses. Moving forward, Oxebridge is pressing to file class action suits against various players in the ISO 9001 scheme on the grounds of FTC violations, anti-competitive unfair trade, and violations of Federal law.
The ISO 9001 Users Legal Defense Fund will help Oxebridge pursue the defense of the standards user community as part of its “Third Phase” efforts. As detailed in his speech on “The PAth Forward,” Oxebridge founder Christopher Paris defined three steps towards improving the ISO 9001 scheme for users:

Phase One: Work within the various committees and agencies to affect change from within.

Phase Two: Work from outside the organizations to drive change by filing appeals and complaints in accordance with official rules, in order to get the industry to police itself.

With the first two phases having been exhausted between approximately 2002 through 2013, Oxebridge moved into Phase Three, but now requires the financial support of industry stakeholders.