Breast implants sold under the Motiva brand name reportedly include RFID tracking chips designed for pet use, and were developed by the company founder in a home pizza oven, according to a financial research firm. Despite numerous international concerns over the dangers posed by the implants, the company nevertheless claims ISO 13485 medical device compliance through the controversial “MDSAP” certification scheme.

Establishment Labs owns the Motiva brand, and the implants themselves are manufactured in two plants in Costa Rica. Establishment Labs claims the Brazilian health agency ANVISA has granted MDSAP certification to the two facilities, but does not name the plants or their addresses. Oxebridge has been unable to confirm its claims. ANVISA does not maintain a public directory of the certifications granted to organizations, but records do exist that appear to support the claim.

The Medical Device Single Audit Program, or “MDSAP,” attempts to provide rapid certification for medical device manufacturers operating in multiple countries. The program, supported by the US Food & Drug Administration, is controversial in that it does not rely on subsequent surveillance audits. MDSAP participant companies can deviate wildly from requirements once they obtain the certification, without any oversight. In the US, MDSAP has been seen as a “pay to play” scheme that risks the health of the public.

The MDSAP status of Establishment Labs would support this theory. According to a report published by the forensic financial research firm Hindenburg Research, Establishment Labs and the Motiva implant line present a serious risk to patients who receive the implants. That report highlights key concerns over Establishment Labs and its founder, Juan José Chacón-Quirós, noting that the company has “has incurred losses every year as a public company, accumulating a $249.4 million deficit.”

Chacón-Quirós has publicly boasted on social media that he invented the Motiva implant line after developing the products in a pizza oven in his garage. 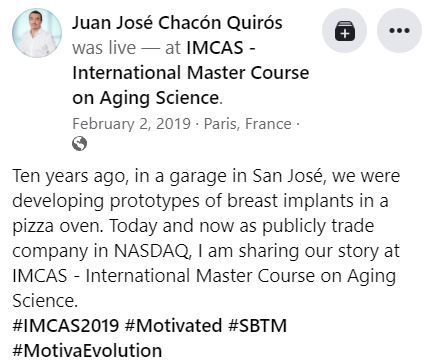 The Hindenburg Research then goes on to claim that Motiva’s “QID” tracking capabilities were achieved by inserting pet-grade RFID trackers into the implants:

Establishment claims to have pioneered innovations like its “Qid” chip technology, a scannable RFID chip embedded inside its implants used by doctors to obtain serial numbers and other basic information about the implant. The RFID chips were originally intended for pets. Establishment bought the technology from a company that reportedly “improperly marketed its implanted microchip for medical uses” before failing after cancer concerns about the chip were revealed by the media.

The breast implant industry was rocked by scandals involving Poly Implant Prothèse (PIP), which sold implants containing industrial-grade silicone, instead of medical-grade. The implants were recalled, and the ISO certification body TUV Rheinland was successfully sued in multiple countries for their role in certifying the products. PIP’s executives were sentenced to prison. Hindenburg reported that Chacón-Quirós “was previously a key distributor of Poly Implant Prothèse.”

Another of Establishment’s “innovations”, its SmoothSilk/Nano-Surface technology, was touted as producing positive clinical safety outcomes and inducing a lower-level immune response. 15 of 24 authors of its key safety study had ties to Establishment and 12 of those 15 had financial ties.

Beyond undisclosed safety questions, we have also identified financial risks. Import/export records show that Establishment ships product to entities formerly owned by the CEO and his family, raising questions of conflicts of interest.

A press release issued in 2017 by Establishment claimed that one of its Costa Rica plants was granted an “EC Certificate – Full Quality Assurance System” from the ISO certification body BSI. Because the specific Costa Rica plants remain unknown, this could not be confirmed.