This one is a bit off-topic from the usual ISO news, but I had so many people IRL ask me about my switch to Google Fi, I thought I’d write about. (I’m not being compensated by Google or anyone for this, I just think some of my fellow road warriors may find it interesting.)

I’d been with the US cell carrier Verizon for 15 years or more, and hated every minute of it. they were too expensive, with terrible tech support, and routinely crammed me into plans that robbed me as much as they could. But signal strength was pretty good across the US, so I stuck with it. Living in Peru meant I needed to get a second Peru phone under the local telco Entel, since the Verizon wallet-rapists wanted impossibly high per-minute rates for international roaming. Umm… no. So I was trapped in a reality where I’d constantly have to switch SIM cards depending on what country I was in.

Because when I travel I need reliable internet, I also had to get a Verizon hotspot. Together with a medium level data plan, my Verizon bill was coming in at $180 per month, with another $30 a month for the Entel phone in Peru.

So when I recently landed in the US and realized I had forgotten my US Verizon chip, I was screwed. The Peru plan had no international roaming at all. I was able to use GPS (it doesn’t use cell signal) while driving, but had to fire up the Verizon hotspot and tether my phone to that in order to get internet. The Verizon data plan was high, but also subject to intense throttling if I went over a certain limit, which I started burning through.

Within a few days I realized this wasn’t going to work, so I began researching Google Fi. I already had a Google Pixel XL (gen 1) phone, so it would be easy. My big concern was coverage, but without my phone properly working I decided to roll the dice.

I downloaded the Fi app on my Pixel, and for the most part things went well. Verizon was — of course — the problem. Google Fi needs your Verizon account number to effect the transfer of your phone number, and the only way to get that was to get into my online Verizon account. Verizon isn’t traveler-friendly, so had locked me out of my online account weeks earlier, for daring to hit it from a Peru IP address previously. It took two calls to Verizon tech support to get my online account working again, and about six hours.

Finally entering my Verizon info into the Google Fi app — which would have taken mere minutes if it weren’t for the Verizon snafu — and it prompted me to either buy a Fi SIM card from a local retailer or order one. I ordered it and paid the express shipping fee (otherwise it’s free), to get it to my hotel ASAP.

Within a day or two, I had the chip, and slipped it in. The Google Fi app choked once, but a quick reboot and it worked without any other hiccups. Within minutes I had phone and internet connectivity.

(An aside: one does have to give up their Google Voice number to use Fi for some reason, but I’m told that this may not be the case in coming months. I rarely used mine, so it was no loss.)

Google Fi works by partnering with T-Mobile and other carriers, and uses some fancy software tech to allow seamless communications even if you are traveling between carriers’ towers. It then boosts internet speeds by lashing up to known trusted WiFi sources, and encrypts all the data using VPN. (Yes, Google can probably see all your data, so anyone terrified of Big G should stay away.)

I was in the Melbourne FL area when I fired up Fi, and found the coverage was great. Internet speeds were good, and comparable to wired hotel internet. Streaming Netflix and SiriusXM was spotless. WhatsApp and Duo video calls were clear, although WhatsApp was noticeably bad, likely because WhatsApp itself is pretty terrible these days.

A week later I traveled to Pensacola, so that would be the first test of how Google Fi’s service quality stood up when moving locations. Again, no problem at all, even in some pretty remote beach areas.

After that it was off to San Francisco, clear across the country, and again — no problems. Calls remained clear and internet coverage fine. I routinely lost signal in the hotel internet, which is normal for any cell phone, but did notice that Fi chokes a bit to regain signal afterwards; the delay is a minute or so, so nothing much to complain about.

Using Uber and Lyft showed the signal remained strong throughout my trips, and internet was never lost no matter where we drove.

Next it was off to New Jersey, then Tampa, then Sarasota — no glitches. 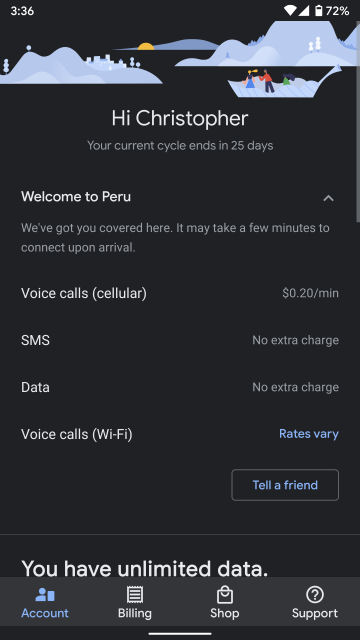 The final test would be flying back to Peru. With a layover in Panama, I knew I’d get to see how Fi handled international roaming. Landing in Panana City, the Fi app took about two minutes after landing to pop a notification saying “Welcome to Panama,” and advising me that it would take a minute or two to connect to local service. It did just that, and I was quickly able to use phone and internet as if I had never left the US. With no roaming charges.

Flying from Panama to Peru was the same — within five minutes I had my Peru service working perfectly. Telephone service was great, and internet was strong and fast. No issues.

This means that I am not only able to dump my $180 Verizon bill, but also cancel my Peru Entel account entirely. The Google Fi plan I opted for was the $70 one, so I am saving about $140 a month. I get unlimited data, international coverage and phone service; international calls are twenty cents a minute, but I frankly barely use the phone anymore. The Google Fi app is great, providing details on your usage, and warning when you reach their throttling level for data, which is pretty high at 22GB / month. (You can opt to buy additional unthrottled time after that, but I didn’t check the pricing on that. The throttled speed was still usable.) You can change your voice mail message, get visual voicemail, and perform call forwarding, all in the app. No more dialing * numbers on  your celly.

I’m not sure how Google Fi would work without a Pixel-branded phone, though. It’s supposed to work on some models, but it is guaranteed on Pixels. The Fi app can check before you commit to the service.

I’d definitely recommend Fi so far, as it surpasses my expectations. Originally, Google Fi was reported as being fine if you didn’t travel. That’s clearly not the case anymore, since I’m using specifically because I travel a lot. The savings just can’t be argued.

One limitation I could imagine is due to the plague of US telco mergers. I can see a day when the various carriers used by Fi merge into one, and boot Fi from their network. Without other carriers to piggyback on, Fi could disappear altogether. That’s not likely in the next decade, though, so I’m not worried.