Former US TAG 176 Chair Co-Authored Book with Her Replacement 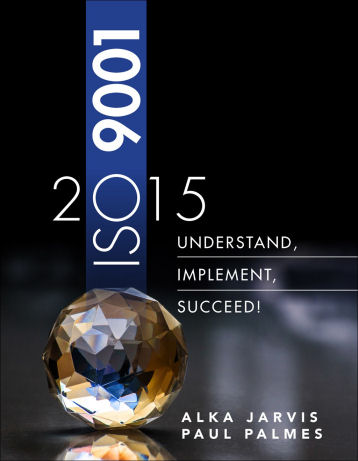 Alka Jarvis, the outgoing Chair of the US Technical Advisory Group (TAG) to ISO/TC 176, the US committee responsible for drafting ISO 9001, has published a book on the new standard alongside Paul Palmes, the new TAG Chair. Ms. Jarvis had personally placed Mr. Palmes’ name on the ballot, refusing to allow members to vote on Alan Daniels of Boeing, who had been nominated by the TAG membership. The election has been called “flawed” and is currently the subject of an internal review by ANSI.

The book, ISO 9001:2015: Understand, Implement, Succeed! was published in December 2015 by Prentice Hall. The TAG election was held just a few months prior.

Oxebridge is awaiting confirmation, but it appears likely that Ms. Jarvis and Mr. Palmes were already collaborating on the book for months prior to the nomination process, meaning that Ms. Jarvis may have positioned her co-author to take on the Chair position in order to ensure improved marketability of the book. This seems likely since manuscripts must be submitted months prior to typesetting and physical printing of a book, and it would have been impossible for Jarvis and Palmes to have produced the manuscript, and for Prentice Hall to have published it, in the 2-month time period between the election and the book’s publication.

It was later reported by Oxebridge that Mr. Palmes may have exaggerated his ISO 9001 related experience on the official nomination form he submitted for consideration as TAG Chair, as well as allegedly padded his resume by claiming 20 years of related experience he does not appear to have. Ms. Jarvis was alerted to this problem and declined to take action, a fact which may be explained by the financial relationship shared by her and Mr. Palmes.

The publication of the book presents new problems for the TAG leadership, which is already facing a number of allegations of cronyism and abuse of power by Ms. Jarvis and her fellow TAG leaders. To date nearly every TAG leader has published a book on ISO 9001:2015, and/or engaged in lucrative speaking events. In addition to Mr. Palmes and Ms. Jarvis, Oxebridge is aware of books written by TAG leaders Jack West, Charles Cianfrani, Craig Williams, Lorri Hunt, and Denise Robitaille. The prominence of private consultants, which comprise nearly 50% of the general membership and a higher percentage of the powerful leadership posts, raises questions as to whether the US TAG sought to make ISO 9001:2015 intentionally complicated, in order to sell books and seminars by the TAG leaders which would later decipher it.

A key criticism made against all the books published so far is that it is impossible that any of the authors had ever implemented a single ISO 9001:2015 system, since the standard was only published in late 2015, and yet the authors are nevertheless claiming expertise in doing so, and now instructing others on how to do it.

The TAG is facing a complaint before the US Federal Trade Commission, charging that it violated a US law that prohibits organizations from using monopoly power to inhibit trade. The TAG attempted to stop a New York City presentation by Oxebridge founder Christopher Paris, and have him replaced with one of the TAG leaders, a move that Oxebridge has cited as a violation of the Sherman Act. The TAG and its management body, ANSI, have both refused to internally investigate the problem to date.

Mr. Palmes has been asked to step down from his position as TAG 176 Chair due to the controversies. Neither he nor Ms. Jarvis responded to requests for clarifications.