In a series of rambling YouTube videos, the owner of the ISO certificate mill Guberman-PMC and its accreditation body “ABAC,” has falsely alleged that the IAF and ILAC accredited lab in China “leaked” the coronavirus, which is now causing a worldwide pandemic. 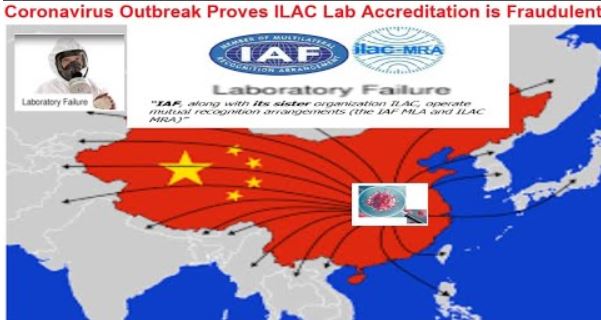 The claim that the virus was leaked from a lab has already been debunked, but continues to spread through conspiracy theorists such as Daryl Guberman. Guberman, however, goes further to falsely implicate the various ISO certification scheme actors who he perceives as competitors to his self-accredited operations.

In over two thousand videos, few of which rarely get more than a dozen views, Guberman has previously accused the IAF, ISO, ASQ and others of supporting terrorism, antisemitism, Nazism, treason and fraud. He has already lost a defamation lawsuit launched by Oxebridge, and faces multiple other such suits from other victims.

Guberman PMC sells self-accredited certificates for various ISO standards, as well as for certificates invented wholly by Guberman himself, for which no supporting standard exists. He claims expertise in everything from aerospace, medical devices, lab testing and firearm manufacturing. He once agreed to provide ISO 9001 certification for a fake company that alleged to make cement life preservers.

Guberman has alleged to be running for US Senate, but has never filed as an official candidate with the Federal Elections Committee.

A so-called “sovereign citizen,” Guberman has refused to acknowledge the authority of the US court system over him. Nevertheless, he was arrested for DUI in 2015.

[Disclosure: Oxebridge sued Guberman and his partner for defamation and won. Given Guberman’s status as a US political candidate, we have opted not to stop reporting on his activities, but in the interest of fairness will do so with this disclosure statement.]