As Board Bleeds More Members, CMMC-AB Registration in SAM.gov Lapses

Raising new questions about the validity of its no-bid contract with the DOD, the CMMC-AB’s official registration in SAM.gov has lapsed since March 4th.

Per FAR 52.204-13, maintaining active status in SAM is a requirement for any holder of a current government contract:

[the contractor] shall maintain registration in SAM during contract performance and through final payment of any contract, basic agreement, basic ordering agreement, or blanket purchasing agreement.

Until its expiration, the CMMC-AB had also failed to maintain the accuracy of the SAM.gov and CAGE code listings, still pointing to Ty Schieber and Mark Berman as the organization’s points of contact. Berman and Schieber were removed from the CMMC-AB last year after a controversial “Diamond Membership” program attempted to sell $500,000-per-person memberships in the AB.

At the same time, other questions about the legality of the DOD’s no-bid contract with the CMMC-AB have emerged.

In addition, there are concerns related to the contract’s compliance with FAR rules related to “cost contracts” which include an “allowable cost” under separate FAR requirements. The DOD has said that while the CMMC-AB contract was a no-cost contract, fees paid to the CMMC-AB would be “allowable.” In confusing statements, the DOD has since appeared to have backed off a prior claim that CMMC costs would be “reimbursable.”

The lapse in SAM.gov registration is particularly embarrassing, given the role that CMMC-AB will eventually have in managing the certifications of hundreds of thousands of defense contractors. Updating a SAM.gov entry is not a particularly difficult task.

Oxebridge reported this first on LinkedIn and Reddit on March 10th, based on a filing through the ISO Whistleblower Reporting system. The story was then picked up by FCW a day later; FCW did not credit Oxebridge in its reporting. In that report, however, an unnamed CMMC-AB representative blamed the SAM.gov lapse on “minor technical issues,” without providing any details.

The FCW report also revealed that two more CMMC-AB Board Members have quit the group. Ben Tchoubineh, a founding Board member responsible for the development of the AB’s training materials and courses, and more recent member Nicole Dean, have both quit the AB, continuing the hemorrhaging of Board participants since the group’s inception in early 2020.

Tchoubineh is the subject of an open Dept. of Justice complaint alleging his course materials failed to comply with the Americans with Disabilities Act (ADA), a Federal law. Tchoubineh largely remained indignant about the allegation, refusing to bring the AB’s current material into ADA compliance, and only promising that future versions would do so. He and the Board ignored an official complaint alleging the ADA violations, forcing the issue to be escalated to the DOJ, which enforces the ADA law.

Tchoubineh gave confusing answers during recent web appearances on the forced divestiture of the CMMC-AB’s training efforts, which are to be spun off to a new organization called “CAICO.” Despite accreditation rules clearly indicating that the AB cannot involve itself in personnel certification activities, Tchoubineh still maintained that CAICO may operate under the authority of the CMMC-AB.

It was largely expected that Tchoubineh would quit the CMMC-AB and form CAICO, a move likely to generate additional conflicts of interest and fraud accusations. Tchoubineh would have personally voted in favor of the DOD contract which mandated the formation of CAICO, and if he personally benefits from that decision, he would be subject to new investigations.

Dean, on the other hand, was a largely silent participant, not having had any public-facing role in the Board since she joined in September of 2020, a tenure of only six months.

In response to the reporting, the official CMMC-AB account posted the following on LinkedIn:

It has been reported that Ben Tchoubineh, chair of the Training Committee within the CMMC-AB, and Nicole Dean, a CMMC board member have resigned, however it is important to note that they will remain on the board for the near future to ensure a seamless transition. We plan to issue an announcement that will offer details on timing, context and next steps early next week.

The only remaining original Board members are Jeff Dalton and Regan Edens, both of whom are at the center of multiple ethics complaints alleging they are engaged in “self-dealing” and conflicts of interest. The Board also ignored a complaint filed against it related to those charges, resulting in an escalation to the DOD OUSD (A&S) office for CMMC Program Management. That office confirmed on March 11th that it was processing the complaint. The issue has also been raised with the DOD Inspector General’s office.

The CMMC-AB continues to make potentially fraudulent statements about its tax-exempt status. Both the IRS and the Maryland Secretary of State have confirmed with Oxebridge that the AB has not obtained official nonprofit status at either the state or Federal level, but the CMMC-AB LinkedIn page continues to declare itself a current “nonprofit” organization. It then adds a contradictory claim indicating the official status is “pending as of 2/16/2021.” 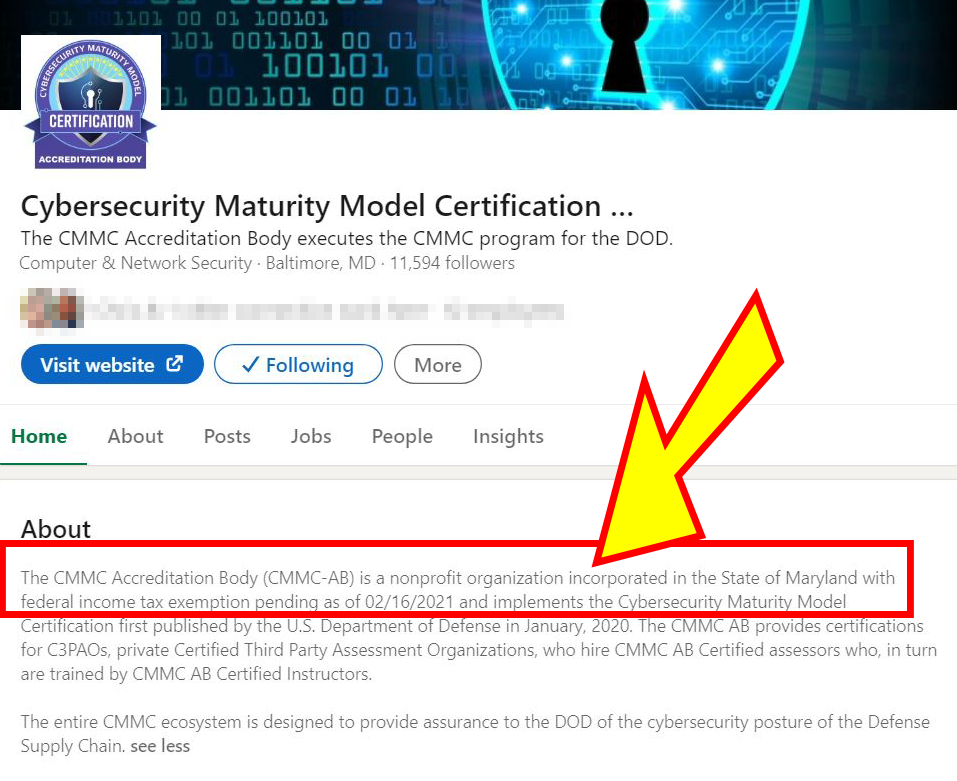 The AB filed official paperwork with the US Defense Logistics Agency in March of 2020 indicating it was already a tax-exempt entity, a potential felony.

The CMMC-AB faces a struggle to recruit a permanent CEO and other officers, who would be joining the organization at a time when it and the DOD are undergoing over a dozen investigations for fraud, waste, and abuse related to the CMMC scheme.

Defense industrial base companies are spending millions of dollars to comply with the CMMC requirements, even as it appears the certification scheme may unravel due to contract irregularities, tax questions, ethics violations and potential felony fraud.