Nevada-based RSR Analytical Laboratories, operated by LettuceTest LLC (formerly Cannex Nevada LLC), received a formal charging letter by that state’s Cannabis Compliance Board (CCB) claiming the company violated multiple state laws. The Nevada CCB is calling on LettuceTest to have its state licenses revoked for ten years, and pay a minimum $62,500 fine. The CCB reserves the right to demand additional penalties or costs in the future.

Cannex had previously had its license suspended twice in 2017 for similar concerns.

A History of Scandal

For its latest charges, the Nevada CCB claimed:

Rather than protecting consumers through accurate and honest testing, Cannex implemented testing processes that were designed to protect the monetary assets of their clients without regard for consumer safety. … Cannex’s microbial retesting practices resulted in the release of multiple cannabis products for sale to the public when they should have in fact failed testing.

The 44-page letter, sent in January 2021, details how inspectors uncovered a pattern of data falsification and test rigging by Cannex/RSR staff, after a routine state inspection conducted in December 2019. During that first visit, three inspectors with the CCB quickly uncovered irregularities. In a review of test results from the prior month, investigators found, “products which were recorded in the microbial records as failing were subsequently repeated with passing results, over and over again.” Investigators then found similar patterns with other tests performed by Cannex/RSR, revealing that when Cannex/RSR found a batch that failed a test, it would repeat the test until a passing result was reported; Cannex/RSR would then only report the passing result.

When interviewed, one Cannex/RSR technician reported that “Cannex management brought her to the understanding that they must balance protecting consumers with protecting the business.”

In digging further, it was discovered that one test technician, responsible for “high-performance liquid chromatography” (HPLC) testing lacked competence and training. Investigators reported that the technician admitted:

… he graduated college in 2017 and stated he had never worked with HPLC instrumentation prior to working at Cannex. He further stated that his entire HPLC training consisted only of reading the standard operating procedure (SOP) for Cannex, followed by a couple of days of direct observation.

CCB then reviewed additional personnel files and found “an overall lack of documented training amongst all laboratory analysts” and that “there were no records of competency assessment present in the files reviewed” for any test technicians.

During the witness of another test, CCB investigators “observed using improper pipetting techniques that would lead to a high probability of spurious results.”

Specifically, after solvent was drawn into the pipette tip, multiple bubbles were observed within the solution in the tip. When dispensing the solvent into the sample vial, some of it dribbled out of the pipette tip and ran down the exterior of the container. Solvent was incompletely dispensed from the pipette tip into the sample container, leaving a remainder behind within the tip. These deficient practices would lead to a high probability of an inaccurately low amount of diluent being included with the sample, and a resultant upward skewing of sample results due to miscalculated concentration.

The charging letter goes on to reveal other problems related to equipment calibration and use, cross-contamination of samples due to re-use of gloves, failure to maintain impartiality, and other damning details.

Worst of all, the CCB alleges that Cannex/RSR “passed heavy metal tests for cannabis samples that should have failed,” risking the health of users of products tested by the lab.

The CCB temporarily suspended Cannex’s license, and notified it of the findings in early 2020.

In 2021, Cannex hired a law firm to have the matter dismissed, claiming the problems had already been resolved. In a September 2022 meeting, however, the CCB disputed this claim, and denied the dismissal.

Despite the scandal dating back to 2017 or earlier, ANAB accredited the laboratory to ISO 17025, attesting to its ability to accurately perform product testing under ANAB certificate AT-2648. ANAB’s website claims its ISO 17025 accreditation “[evaluates] the laboratory’s ability to produce precise, accurate test and calibration data” and that “facilities are regularly reassessed to ensure technical expertise is maintained.”

The ANAB certificate was issued in December of 2021, long after the multiple violations by Cannex were reported in the industry press, and nearly a year after the latest charging letter. 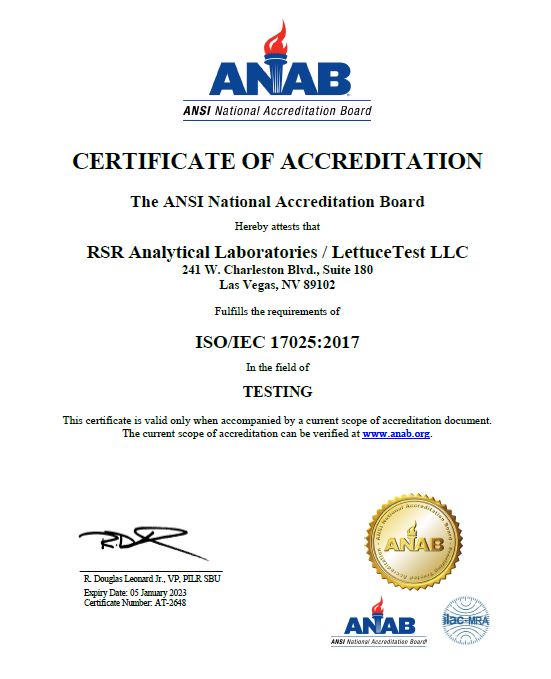 The certificate is signed by ANAB’s R. Douglas Leonard. The scope of ANAB’s accreditations includes the exact tests that were reported by the CCB as falsified, including HPLC cannabinoid testing and heavy metal testing. 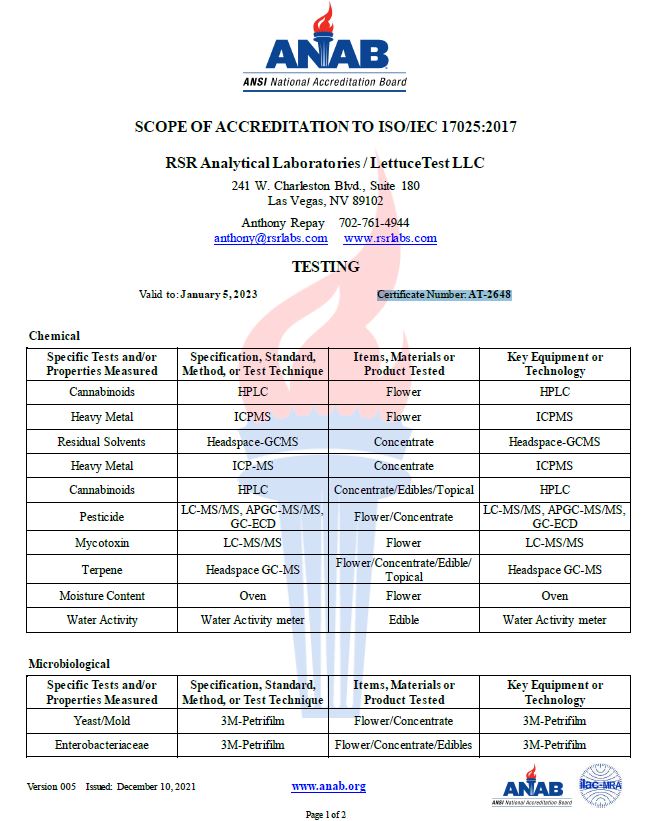 It is not known if this is the first time ANAB accredited the company, or if this was a re-accreditation.

Oxebridge estimates that ANAB would have had to overlook, ignore, or improperly audit over one-third of the ISO 17025 standard to have not uncovered the problems reported by the Nevada CCB.

ANAB has pushed hard into the cannabis industry, after initially rejecting doing work in the field due to the changing legal landscape. Now, ANAB is offering training and other services, and trying to assert itself as an industry expert in cannabis production and testing. In January of 2022, ANAB announced it launched a program to “assess and accredit certificate programs as conforming to the requirements of ASTM D8403-21, Standard Practice for Certificate Programs within the Cannabis and Hemp Industries.”

Cannabis production and testing remains largely unstandardized, with a tangled nest of local or self-declared standards and methods being used in any given region.